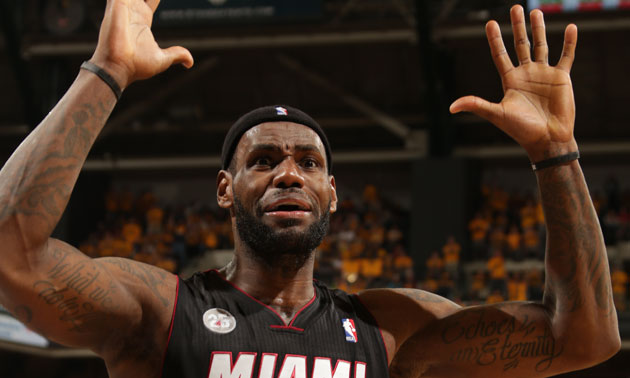 After blessing SLAMonline with the nERD Power Rankings throughout the season, our guys at numberFire are back to help us look at the postseason in an analytics-based way. So what do the algorithmic models say about how statistically unlikely some of the numbers from Game 4 were? NumberFire’s Chief Editor is here with the answer.—Ed.

The Pacers took Game 4. They did so by topping the Heat’s effective field goal percentage (eFG%) by .079, collecting a staggering 45.5 percent of offensive rebounds, and committing 2.7 percent fewer turnovers than their Playoff average.

Does that all sound a little bit off to you? Us too. The Pacers may have only won Game 4 by seven points, but it took an incredible amount of statistically improbable outcomes to get there.

We decided to run some of last night’s numbers through the stats machine, just to see how likely they would have been given each team’s regular-season averages. These odds are assuming the Heat or Pacers played a League-average squad, so, for instance, Miami’s projected field-goal percentage might actually be a bit lower because of the opponent. But these odds still give a good indication of just how unlikely a lot of the results really were given their previous play.

How Did That Happen?

Miami Shoots .442 eFG% or Less: 6.90 percent
The Pacers may hold the League’s number one defensive eFG% at .453, but for Miami, these types of games just never happen. In 82 regular-season games, the Heat shot below 40 percent from the field exactly twice: November 11 against the Grizzlies and January 27 against the Celtics. In both of those games and in this one, Dwyane Wade was the ice cold one, going 3-15 against Memphis, 6-20 against Boston, and 5-15 last night. Given 15 shots, the odds Wade would make five or less are only at 11 percent.

Indiana Makes 35 or More Shots on 70 Attempts: 16.86 percent
While Indiana shooting 50 percent may be more likely than Miami shooting less than 40 percent, it’s still not the most likely scenario around. If the defensively minded Pacers played games against a league average team into all eternity (Mike D’Antoni’s version of slow-paced hell), Indiana would shoot this well around once every six times. Now figure that the Heat are better than the League-average team—their defensive eFG% ranked ninth this year—and you realize that seeing a repeat Game 5 Indiana performance isn’t likely.

Indiana Collects 45.5 Percent or More of Offensive Rebounds: 2.30 percent
Yeah, we know the Heat can’t exactly rebound: Miami collected 73.0 percent of defensive boards during the regular season, just 24th in the League. But allowing Indiana to collect nearly half of the available rebounds on their offensive end? That’s a new low. Strangely enough, I may put this one at the feet of LeBron. He collected 20.8 percent of available defensive boards during the regular season, but only 6.7 percent last night.

Yesterday, when I took a look at San Antonio’s chances against the Heat and Pacers, I mentioned that Indiana only held an 17 percent chance of winning the series. Naturally, those odds have gone up, but they’re not out of the woods yet.

This is what happens when you win so improbably: The odds aren’t good that you’ll do it again. As it stands, the most likely series outcome is Heat in 7, but that’s only by percentage points over Heat in 6. There is currently a greater chance of the Heat taking both of the next two games than there is of the Pacers winning at all.

That Game 1 Layup hurts even more now, doesn’t it? Poor Pacers fans. Their best team since the Reggie Miller days, and they run into the South Beach buzzsaw. 29 percent isn’t terrible odds, but it’s a substantial amount to attempt to overcome.