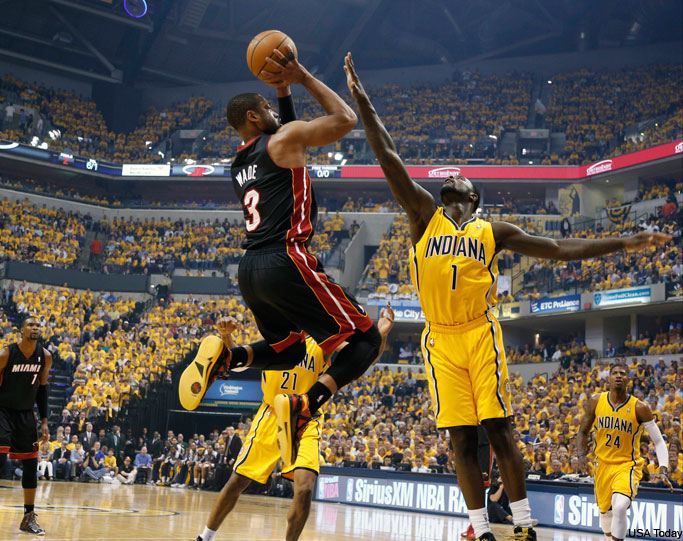 In Game 1, the Pacers showed they could reach a new level on offense. The Heat showed that they have gears left to hit as well, cranking up the pressure to take Game 2 and steal away home-court advantage.

Miami zoomed past the Pacers with an extended 15-5 run in the fourth quarter, led by LeBron James down the stretch. Frank Vogel said in his on-court interview that he knew James would try to take over, but his troops could do nothing to stop it. The King dropped in 12 of his 22 points (along with 7 rebounds and 6 assists) in the fourth, while setting the frantic tone for the defense, giving the Heat an opportunity to be deadly in the fourth.

After a quiet first half, he finally found his aggression toward the end of the third, driving hard to hole and finding guys like Chris Bosh (9 points, 6 rebounds) and Norris Cole (11 points) open around the arc.

Dwyane Wade was strong at the start and finish, piling up 23 points, 5 rebounds and 5 assists while hitting all five of his shots in the fourth, looking as good as he has all season. The two stars combined to score 22 of the Heat’s 25 points in the final quarter.

The maintenance plan that the Heat kept for DWade all season seems to be paying off. The veteran guard, banged up for much of the last two Playoffs, started the game off hot once again and carried the Heat early on while LeBron played passively. Even while the Heat weren’t sharp to start, they remained active on both ends. They got their hands on countless Indiana passes, making life difficult for the Pacers all over.

“The best thing tonight, even when we made mistakes, we were flying around,” James said from the post-game podium.

This one nearly went down as the Lance Stephenson Game. Born Ready went off in the third quarter, dunking, bombing away from long range, getting to the rim at will and setting teammates up for good looks. Lance finished with 25 points, a Playoff career-high, along with 7 rebounds and 6 assists. By the time the fourth quarter started, though, Stephenson looked gassed and didn’t have enough to carry the Pacers to the finish line.

The Pacers gave themselves chances all game, especially on the offensive glass, where they managed to tip out miss after miss. They corralled 16 of their own misses, creating 13 more shots than the Heat, but shot 10 percent worse from the field than Miami (50.7 to 40). Roy Hibbert was spectacular in that regard, grabbing 8 offensive rebounds, two more than the entire Heat roster. He finished with 12 points and 13 rebounds, and his interior defense kept the Heat out of the paint early. Unfortunately, his frontcourt partner, David West, was much less effective than he’s been in the last few Pacers games, finishing with 10 points and 6 rebounds.

The Pacers could be looking at some problems as they head to Miami. Paul George (14 points, 4-16 shooting, 6 assists) had a nasty collision with Wade early in the fourth quarter, with his dome colliding with both Wade’s knee and the floor. PG told reporters after the game that he “blacked out” and dealt with blurred vision for the rest of the game. Not to throw the “C” word around, but those are the kinds of things you hear from football players who get lit up going over the middle. To make matters worse, Hibbert and Stephenson were both limping by game’s end.

The Pacers have three days to recover before taking on the Heat in Miami on Saturday for Game 3.