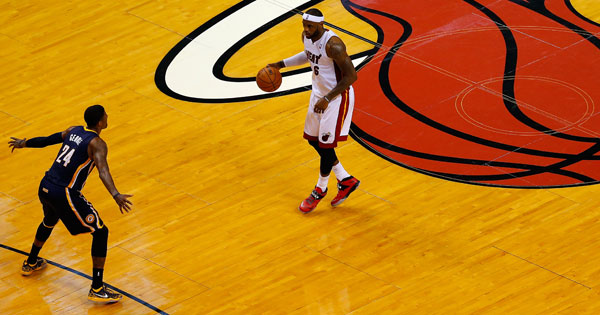 Slow starts. Struggling stars. “Signs of weakness.” The Heat didn’t have a problem with any of them on Monday night, as they dominated the Pacers to go up 3-1 in the Eastern Conference finals.

Chris Bosh buried his Indiana demons, going off for 25 points, hitting 7-12 from the field and 3-5 from deep, his first time hitting double figures in Miami’s last eight Playoff games against the Pacers. After Miami trailed early on in the first three games of the series, Bosh made sure that didn’t happen, as he scored the first eight points of the game and had 17 in the first half. He stayed aggressive with his teammates feeding him the ball, forcing his way to the line while hitting 8-10 from the stripe.

After getting that boost from Bosh at the start, LeBron James took over and carried the Heat to an easy win. The King looked like he didn’t give Lance Stephenson (9 points, 5 rebounds, 4 assists) a single thought all game and dominated the Pacers. James went off for 32 points, 10 rebounds and 5 assists and made it look easy, knocking down ridiculous fadeaways mixed in with freight train runs through the entire Indiana defense. He put in 14 points in the decisive third quarter, where the Heat stretched their lead from five points to 16 in the frame. Of course, when the Pacers showed signs of life too late in the fourth quarter to make it count, James was there to put them down, slicing through the lane for a hoop plus the foul to put an end to things.

The Pacers were starting to look like they’d put whatever issues behind them, but they turned back into a team that looks more like they don’t enjoy playing together. Stephenson’s trash talk backfired big time; Lance didn’t drop in his first basket until there were five and a half minutes left in the game, and was disengaged all night. He picked up three careless fouls in the first 15 minutes of the game, earning himself a seat on the bench.

Roy Hibbert was taken out of his game from the jump after getting torched by Bosh. He picked up three first half fouls and finished with his fourth scoreless game of the postseason. Throw in Paul George (23 points, 7 rebounds, 5 turnovers) being careless with the ball, quick on the trigger and lost on defense, along with a general air of frustration from the team, and you’ve got all the makings of a blowout. The Pacers gave the ball away 13 times to just five from Miami, and were outscored 20-7 in points off turnovers. The Heat also earned twice as many free throws as the Pacers (34-17).

While Frank Vogel said after the game that he wasn’t disappointed in his team’s effort, the Heat were the far sharper team. They zipped the ball around the perimeter for open shots and were active on defense, disrupting any rhythm the Pacers got going. David West (20 points, 12 rebounds) and Luis Scola (12 points, 6-8 from the field) were the only Pacers who consistently found good looks, but Vogel didn’t try to play them together all night.

Playing their third starting lineup of the series with Chris Andersen sidelined, the Heat didn’t miss a beat. Dwyane Wade didn’t have to carry as heavy of a load as he had in the first three games of the series and scored 15 points. Rashard Lewis, who moved into the starting lineup, was scoreless. But as Erik Spoelstra gleefully pointed out after the game, he was a plus-14 for the game. In the two games in Miami, he didn’t score in 43 minutes but was plus-35 in that time.

Indiana will have to get out of their own heads in order to extend the series at home on Wednesday, while Miami will be looking to clinch a trip to their fourth straight Finals.