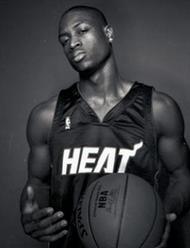 The regular season jumps off tonight (finally!), but before that happens, we’ve got to wrap up our Team Previews.

Vivek Wallace from Crazy From The Heat was kind enough helps us preview the defending champs: Miami Heat.

SLAM: It’s pretty obvious that it’s D-Wade’s world and we’re all just living in it. Do you think Shaq has come to that realization yet?

VW: Shaq gave a pretty compelling answer to this question and how it relates to his team’s success. Some view it as an excuse for his decline in play, but it’s hard to view something as an excuse that has proven true. Basically he stated that he never won anything until he learned to defer…And since that process began to now, each time he’s earned another championship ring his numbers have gone down while others around him have seen their numbers steadily increase. His tenure in Miami will be no different. Shaq is
perfectly ok moving to the co-pilot’s seat because he knows that he’ll remain somewhere in the “cockpit”. Bottom line: He’s fine knowing he’s not the “main attraction” simply because his presence alone will never allow him to be a mere “preview”.

Teams that Shaq has played on have developed the habit of coasting through the regular season and turning it on at playoff time. Can this formula work again this year?

Someone make sure ‘Riles has left the building on this one…(Whisper)…If it’s not broke then don’t try to fix it. An aging team like the Miami Heat may not have much of a choice. Last year we saw a very talented and somewhat youthful Detroit squad peak too soon and nearly get dethroned by a team with a one horse stable (Lebron and the Cavs). For Miami to be successful after a long and tiring, yet very short summer, they will have to find a way to get good playoff seeding but still leave some energy in the reserve tank. My advice: Set the tempo early and hit the cruise control button often if you need to…Just be ready when it’s time to play for all the marbles.

Have Stan Van Gundy’s remains been found yet? I was a bit dissapointed they weren’t in that bowl in the Heat’s locker room during the playoffs.

No rumors have surfaced about any possible returns, but judging by the way things ended up for the Miami Heat last season I think all parties involved can live with the result. I don’t see Stan swapping his “fatherly chaperon” cap for time on the hardwood anytime soon, but stranger things have happened…Stay tuned…Don’t be surprised!

To decide the fate of humanity: Wade or Lebron?

If I had to pick one of the two it would be D-Wade. Given is affinity to his elementary school pal, turned wife, Siovaugh, the fact that his mother is a renowned spiritual leader, and the fact that he’s been tithing since the age of 13, I think all make him a natural in this spot. In a perfect world, I think both guys are more than qualified and here’s an interesting stat supporting that theory. Take the lives of JESUS CHRIST, Martin Luther King Jr, Elvis Presley, Tiger Woods and Denzel Washington. Five larger than life figures who revolutionized their “craft” and touched lives of the masses forevermore. Now consider the fact that they all share the same zodiac with both Lebron and D-Wade, and I think either man could fit the bill rather effortlessly.

Alright, enough foreplay, how will the Heat fare this season?

Any
Basketball
Champion
Driven for
Excellence
Finds
Greatness to be
His soul’s
Internal
Justification for self validation.

A drive for excellence yields greatness. Established greatness yields
self validation. Last year was the initiation, this year expect to see
the validation. I expect Miami to put a stamp on it!