Heat to Face Celtics on Opening Day, Thunder on Christmas 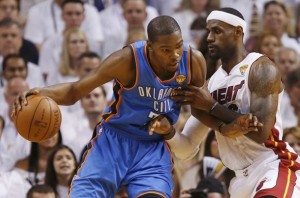 It has been a wild offseason, filled with dramatic signings and roster changes across the NBA. The League, however, wasted little time reminding everyone that a new season (with actual, meaningful games) is nearly here, and leaked some juicy scheduling news to the media.

According to multiple published reports, the defending champion Miami Heat will do battle against their arch-enemies from Boston on opening night.

We will then be treated to an NBA Finals rematch between Miami and the OKC Thunder on Christmas. Giddy up!

Per the Sun-Sentinel and Miami Herald:

It won’t take long for Ray Allen to experience a reunion with the Boston Celtics. While the complete NBA schedule will not be released until later, the Sun Sentinel has learned from a league source familiar with the planning that the Miami Heat will open the 2012-13 NBA regular season on Tuesday Oct. 30 at AmericanAirlines Arena against the Celtics.

The Heat’s first rematch of the 2012 NBA Finals will be Christmas Day, when the Heat host the Oklahoma City Thunder. The Heat play Feb. 14 in Oklahoma City in the second game of that two-game season series. […] That Heat-Thunder game is set for 5:30 p.m. on ABC. The Celtics opener at AmericanAirlines Arena will be played at 8 p.m. Tuesday, Oct. 30, and be televised by TNT. […] The Heat’s opening-week schedule will have one other marquee game: Miami will visit Madison Square Garden to play the Knicks on Friday, Nov. 2, with ESPN televising. The league reserves the right to change the schedule before it is released Thursday, but other Heat games of note include a Dec. 31 day game at Orlando, and the Lakers visiting AmericanAirlines Arena on Feb. 10.

The NBA still reserves the right to alter the schedule, per the reports.

We may still be about three months away from the start of a new season — with a full 82 game slate — but the anticipation couldn’t be higher.