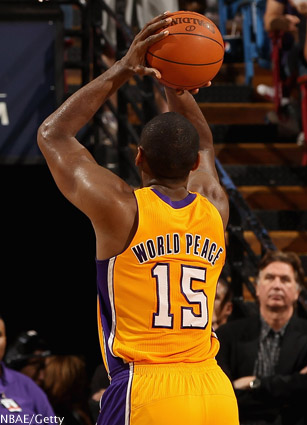 In writing a different article for a far inferior publication to SLAM [aren’t they all?—Ed.], I was confronted with a stark reality that sent shivers up my hoop-loving spine: The last NBA All-Star to truly come out of New York City is a 32-year-old man who played at La Salle Academy named Metta World Peace. Yes, the defensive specialist and role player formerly known as Ron Artest, who was an All-Star one year with the Pacers, is the last one. (And in case you’re saying, “What about Carmelo?” Mr. Anthony might have been born here, but the guy is a product of Baltimore’s basketball scene, no matter what that billboard outside of MSG says.)

I went back to the archives to make sure I wasn’t forgetting somebody. After all, this is New York City! The Mecca! Home of The World’s Most Famous Arena! This is the city that gave us Connie Hawkins and Kenny Anderson; the King brothers and the Marburys. It gave us the Rucker Tournament and Heaven is a Playground. We can thank New York for basketball played outdoors, the blacktop and a center named Lew Alcindor. All these parts of our rich basketball mosaic that we take for granted found ample soil in the place that inspired The City Game.

And yet today, NYC is an afterthought for scouts and colleges alike. If you were to do an all-NBA team from New York City, it would have solid but unspectacular role players such as World Peace, Lamar Odom, Taj Gibson and Sundiata Gaines on it. Somewhere along the way, we lost our ability to dazzle and translate the hours on the blacktop—the Bobbito Garcia-style flair, the ability to re-imagine what the game could be—to the big stage.

The question is, Why? The answer lies on numerous fronts. The first culprit in my eyes is the professionalization of youth sports. Today, if you show an inkling of the height, strength, speed or skill needed to become an NBA player, off to the boarding school, private school, specialized coaching school of your choice, you go. Even LeBron James, born into poverty in Akron, OH, by virtue of his mighty skill, went to St. Vincent-St. Mary High School, a private, upscale institution. No longer does great talent develop on the blacktop. The days of college coaches making their way uptown and to Brooklyn to watch run to see which teenager has the raw, unmolded skill to make it to the next level are gone. Today, everyone’s already being molded by the time they hit puberty, and blacktop is bad for precious ankles.

Then there’s the fact that the New York game has become a victim of its own success. You don’t need to be from New York anymore to have that New York style. The style is to be found on YouTube, and the urban has been suburbanized to a remarkable degree. Look at the best American-born players and where they’re from. Kevin Durant’s from the Maryland suburbs. Kevin Love went to Lake Oswego High School in Oregon. Dwyane Wade, who grew up in Chicago, was sent out of the city, to Harold L. Richards High School in Oak Lawn, IL. The suburbs is the new city, and if you’re not from the suburbs, you will be sent there.

Finally, there is the globalization of the game. Every team in the League is now a tapestry of international talent. At the risk of offending, that talent doesn’t play “an Argentinian style,” a German style or a Serbian style. From Rubio’s slithering bounce passes to Manu’s derring-do in the lane, it’s just New York City rebranded. The fact is that the city has changed. I went up to the court where I played forever growing up, and it’s been turned into a soccer field. The youth leagues have been whittled down. The community centers have shuttered. The public money for coaches has dried up as well. Our city is all spectacle: no cake, just frosting. To find its legacy, leave town and find a spit-shined, suburban AAU league near you. The legacy will be waiting for you, but not the balls.