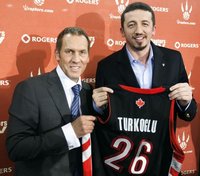 The summer has not been kind to Raptors GM Bryan Colangelo. He lost his franchise player to Miami, criticized said player after he left (and was almost universally shot down for doing so), and there’s even been some chatter about his job possibly being in danger.

To add to Bryan’s issues, another former Raptor — one who didn’t pan out at all — is letting the world know how crummy of a deal it is to play in Toronto, via FOX Sports Arizona:

“People have to realize something is wrong with that organization and nobody wants to go there any more,” he said in a phone interview from Turkey, where he is captaining the Turkish national team at the World Championships. “It’s not just the players who see this.”

Turkoglu’s remarks were sparked by Colangelo’s recent criticism of former Raptors teammate Chris Bosh. Colangelo accused Bosh of “checking out” last season while the Raptors were battling the Chicago Bulls for the final Eastern Conference playoff spot … “It’s funny that people will talk behind your back,” Turkoglu said of Colangelo.

“If he was feeling this way, why not have the guts to say it during the season? Why not say it to Chris? Now that Chris has left, it’s not nice to say those things. Chris has been a franchise player and he did a lot of good things for the Raptors,” Turkoglu added. “I don’t think Chris is the type of player to quit on his teammates.”

To his credit, Colangelo refused to engage Turkoglu in any type of war of words, and wished him well in Phoenix.

Things aren’t going to get any easier for Bryan and the Raptors, as they try to convince NBA players that Toronto is the ideal place to live and work.