Here’s To The NBA’s True Underdog 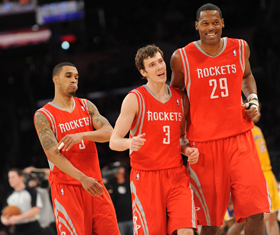 The single greatest mystery in the NBA lives deep in the heart of Houston, TX. It’s a mystery greater than why LeBron doesn’t shave his head or when Carlos Boozer is going to realize that we know he paints his hairline on. It’s even more puzzling than the episode of “Lamar Odom and the Disappearing Career in Dallas,” which the next Harry Potter film may be based on.

The question, which has been one NBA experts have tried to figure out for years, is baffling. How are the Houston Rockets able to compete at such a consistently high level?

It’s possible that the casual NBA fan has failed to realize just how well Houston has played for years. To illustrate how successful the Rockets have been, allow me to borrow a jaw-dropper from stat guru and Rockets GM Daryl Morey. Only the San Antonio Spurs, Los Angeles Lakers, Dallas Mavericks and Phoenix Suns have more wins than the Rockets in the past 10 seasons. And yet, on paper the Rockets, Denver Nuggets, Charlotte Bobcats, New Orleans Hornets, Detroit Pistons and Cleveland Cavaliers are the only NBA teams that don’t contain a player in the top-40 slots of the SLAMonline Top 50. The next time a Lakers, Spurs or Heat fan complains about injuries, just reply, “Houston Rockets, son. Shut the hell up,” and move on.

If the Houston Rockets had one alpha dog player on their team—a Kobe, LeBron or Durant—how could anybody feel they’d be anything less than deep Playoff contenders? Instead, the Rockets are stuck in basketball limbo in every sense of the term. They’re stuck between the always talented Spurs and a defending Champion and much sexier team to play for in the Mavericks.

They reside in the central part of the US, a severe disadvantage for a league of stars who love the big market appeal of L.A., New York and Boston. They never can quite make it over the top to a title, which would be a game-changer for free-agent acquisitions, and refuse to fall low enough in the lottery process to grab a Derrick Rose or Anthony Davis type. The last time that happened in Houston was when they chose Yao Ming. Rest in basketball peace, Big Man.

When you consider their rate of success compared to the actual talent on team, the Rockets are the greatest underdog story in the Association. Yes, Spurs fans, there is plenty of reason to pound your chest and play the “no respect” card. But at some point, it’s a bit laughable to say nobody recognizes your accomplishments when you’re tied for the top seed in the Western Conference.

How do people know the Spurs are good? Easy. They just have to look at the standings. Plus, you have the trio of Tony Parker, Tim Duncan and Manu to match another three or four players who would be fighting for a starting spot in Houston if a trade happened between the two teams right now. Case closed.

The Rockets, for better or worse, fight and claw their way to Playoff contention nearly every season. How much easier would it be to just tank (something the Spurs flat out did to get Tim Duncan) and get a top pick? Easier than hitting on Kim Kardashian if you brought a camera crew with you.

For years, I’ve begged for Daryl Morey and H-Town’s Finest to throw pride aside and be the anti-Oakland Raiders. “Just lose, baby,” would be the simplest way to bring a title back to a city starved for a Championship. No, Houston Dynamo victories don’t count.

Instead, Daryl Morey, underrated owner Les Alexander, and the rest of the organization put their lab coats on year in and year out and concoct an indisputable formula for success, even if it is sometimes of the fringe variety. If Billy Beane kicked baseball’s powers that be on their asses, then Morey has got most NBA GMs in a figure-four leg lock with the way he deals with personnel.

Seriously, you could write a screenplay about the Rockets and it would be as technically sound as Moneyball. Of course, instead of Brad Pitt you’d have to get Seth MacFarlane to play the role of Dork Elvis. Both are self-deprecating and know talent when they see it. Plus, they’re willing to crack a joke for the sake of the punchline. Or did you think Hasheem Thabeet in Houston was actually a basketball move?

Morey mantra put aside, take a look at the Rockets’ roster. With all due respect, it’s filled with journeymen who sign autographs as “role player” instead of superstar. That’s meant as a compliment. If the Miami Heat were to cut everybody outside of LeBron James and Dwyane Wade and then add Kyle Lowry, Luis Scola, Goran Dragic, Courtney Lee, Marcus Camby, Chandler Parsons, Samuel Dalembert and Patrick Patterson as their remaining ingredients, that’s a Championship team, right? It works because there is more resiliency in those would-be former Rockets than Miami currently has in its entire arena.

(Wade, LeBron and Shane Battier, you are excluded from that statement. The jury is still out on Chris Bosh.)

Oh, and they also have Coach Kevin McHale, a guy who struggled in Minnesota. What happens when he comes to Houston? He becomes a Coach of the Year candidate. Like most success stories in life, part of winning is based on the people you’re surrounded by. Ask Kevin Garnett.

McHale is a great fit in Houston because he’s scrappy and never minded Larry Bird getting the spotlight in his prime. Neither do the Rockets, who embrace the “next man in line” philosophy better than any team in recent memory. “What’s the next man in line philosophy,” you never asked? Well, there’s an epic scene in the film Glory that illustrates it. In the scene, Colonel Robert Gould Shaw (Matthew Broderick) has just been shot in battle. Enter Private Trip, played by Denzel Washington, who gives one of the most stirring and efficiently breathtaking performances ever in a war movie. Roll that beautiful bean footage.

That, SLAM Nation, is what a team stands for. To know the odds are against you and to say, “to hell with it. We’re climbing that damn mountain together. Let’s see how many bullets they’ve got.” Thus ends Coach Sweeney’s speech. Now, grab some orange slices.

The reality for Rockets fans is that the mentality of the 2012 Rockets squad is nothing new to them. If there is a singular moment that defined the “next man in line” work ethic of them, it began in the 2009 NBA Playoffs, when Yao Ming went down in Game 3 of the second-round series versus the Lakers. I was at Game 4 and you got the sense before the game that the Rockets were the only people in the Toyota Center who thought they were still in the series. It turns out they were right.

Aaron Brooks lit the Lakers up, and then lit up press conferences with a suit I called his “Fonzworth Bentley” look. Sure, they lost the series, but the spirit of the Rockets—once known for their “heart of a champion”—was reborn. The trend has continued ever since. When Aaron Brooks copped attitude? Kyle Lowry stepped up and played at an All-Star level. What about when Lowry went down with an injury? No big deal. Goran “The Dragon” Dragic grabbed the flag and marched up the hill on way to being last week’s Western Conference Player of the Week. This isn’t a fluke. For the Rockets, it’s a way of life. And yet most NBA fans still don’t show them love or notice their achievements.

It’s strange to think how vastly different this squad would look had the Chris Paul to Los Angeles Lakers trade gone through. Pau Gasol would be playing down low and Jeremy Lin would have stayed in Houston and perhaps treated Texans to a taste of Lin-sanity; Kobe and CP3 would be the toast of Lala Land; and Lamar Odom would be crying in some King Cake in New Orleans. But it didn’t happen, thanks to David Stern, and that may end up being a good thing.

Much like the Boston Celtics, the Rockets likely dodged a bullet by not having a blockbuster trade go through this season. Unfortunately, the NBA works like fantasy football. You can’t trade three players with B-level talent and get an A-lister. And still, we believe.

At some point, the first superstar player since Tracy McGrady is going to figure out that Houston is a wolf in sheep’s clothing. And when that happens, Daryl Morey, Kevin McHale and the band of brothers are going to embrace the missing piece and continue to spread the revelation that the Mavericks taught the Association last season—that you can buy talent but you can’t buy the grit and intangibles needed to win rings. Until that day, the Rockets will keep doing what they do; putting their hardhats on, stamping their timecard, and doing work.