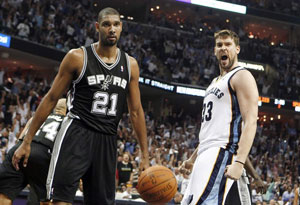 The season of summer movies is right around the corner and, by all accounts, looks to feature an ungodly number of films within the superhero genre. Captain America, Thor, The X-Men and Green Lantern all will grace the silver screen. It provides an interesting parallel when put in the context of the NBA season considering that we all are about to have to come to terms with a devastating truth. The headline? Superman is dead.

With all due respect to Dwight Howard, who is trying to play the part for a newer age of basketball enthusiast, the real Superman in the Association was and forever will be Shaquille O’Neal. His larger than life body was only matched by his personality, creating a figure that tore down backboards like The Man of Steel tears through meteors to save Metropolis, while also lifting up the spirits of fans everywhere who fell in love with the personality of the jolly giant. Sadly, we have yet to see him make any real impact in this year’s ultimate test for hoops supremacy. (Perhaps Celtics green is his Kryptonite?) As Boston gets some time off in preparation for its next opponent, likely the villainous Miami Heat

(the city of Cleveland certainly thinks LeBron James should play the role of The Joker), the Celtics hope that Shaq can muster up one last feat of super-strength.

O’Neal ranks as only one of many heroes falling from the Sun. Time, the ultimate nemesis, is delivering supersonic blasts to the bodies of our hardwood saviors. Tim Duncan, Kevin Garnett, and yes, even Kobe Bryant are among the group who will soon be looking more the part of Clark Kent than The Son of Krypton. That much is apparent as we watch younger teams like the Memphis Grizzlies and New Orleans Hornets push the San Antonio Spurs and Los Angeles Lakers to the limit in the first round. Garnett has been blessed with a combination of landing in a weaker Eastern Conference and the powers of Paul Pierce, the forever youthful Ray Allen, and super sidekick Rajon Rondo. How long he can perform at a higher level is anyone’s guess, but he isn’t getting any younger. It’s likely one reason we see such urgency in Boston this season.

A large group of journalists and bloggers had gone chalk in the first round of their NBA predictions. Yes, the higher seeds appeared to have heart and displayed a relative amount of toughness, but the popular opinion was that the veteran guard of our league would emerge triumphant. (Did anybody really think the Memphis Grizzlies could beat San Antonio, for example?) The problem with that theory is that the stars we have grown to love (and hate) are starting to fade with alarming quickness. Anyone looking for proof can watch how swiftly the Grizzlies handled the Spurs in Game 4. Even head coach Gregg Popovich was left at a loss for how to handle the situation. He eventually did the only thing one can do when they’re beaten mercilessly into the ground. He gave in, putting the demigod Duncan on the bench to rest. (Somewhere you can hear Marv Albert asking, “Is this the end for The Big Fundamental? Tune in next game! Same ball time, same ball channel!”)

Luckily for Spurs fans, Duncan hasn’t taken an eternal slumber quite yet. Like almost all the great players in the game, he has too much pride to walk away right now. But his time is coming. Time, as they say, waits for no man, not even the greatest power forward of all time.

This isn’t the first time the NBA has watched a group of iconic figures fall. We’ve witnessed Larry Bird hobble down the court with a back brace as his team was rocked by Larry Johnson’s Charlotte Hornets. We’ve seen Michael Jordan try to make magic as a Washington Wizard, ultimately being unable to carry his team on his back to the promised land. (In his defense, even Harry Potter couldn’t have saved that team.) It’s painful to watch the death of a hero and even more of a downer to realize how fleeting the memory of their feats is. Even Michael Jordan, who came as close to invincibility as any player in the last 30 years, is an afterthought in the minds of some younger fans. That seems unfathomable. So was the notion that Zach Randolph could have his way with the No. 1 seed as recent as two weeks ago.

The silver lining, however, is two-fold. The death comes quick for most athletes’ careers and the reality is that, while there may not be another like them, there is always another hope.

Just like it happened in the late ’90s, a new group of heroes are ready to take to the sky. Derrick Rose, Kevin Durant and Dwight Howard are already imposing their will now, pushing the old guard off the skyscraper. And as much as we hope and pray Kobe’s fall-away jumper will stay in the air, or that Duncan’s bankshot will continue to kiss the backboard, nothing lasts forever. Ask Michael, Larry and Magic about it. Jordan still toys with the idea of putting the suit on one for one last visit above the clouds. The problem is that once you’ve held the hopes of thousands in your hands and delivered, the role of sidekick just won’t do.

So, cling on to the cape while you can, true believer. The ride will be over before you know it. All we can do is take mental pictures for our sentimental scrapbooks, left with the bittersweet comfort that we were there.