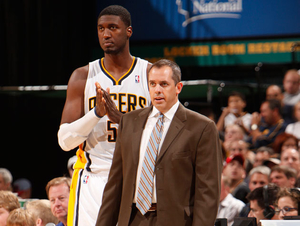 Vogel told the press that the big fella looked “worn down”, and it probably didn’t help Hibbert’s cause that he was caught watching a “King of the Hill” sketch on the jumbotron instead of paying attention in timeouts.

Hibbert played a season-low 9 minutes, and finished with zeros next to his name in points, rebounds, assists, blocks, steals and even fouls.

“I got nothing to say,” Hibbert muttered.

“My choice,” Hibbert said, taking ownership for not speaking to the media after the game. Hibbert then mentioned the team’s director of media relations. “You could tell (David) Benner that. I’ll take the fine.”

Prior to last night, Roy Hibbert hadn’t gone scoreless and rebound-less since his rookie year.

Even Hibbert’s teammates admitted that the lumbering center looked ragged, and couldn’t keep up with Atlanta’s quicker lineups.

Roy Hibbert wisely elected not to air any more of the team’s dirty laundry, which is about the only thing Frank Vogel and the skidding Indiana Pacers can be happy about these days.