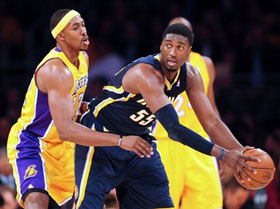 With the Indiana Pacers sitting at 7-8, the panic button is within arms reach. After giving us a glimpse of how good the team could be in the Playoffs last year, the Pacers have struggled to meet rising expectations coming out of the gates this season.

Even after falling to the Miami Heat in the second round, the Pacers looked like a team that could contend in the Eastern Conference for years to come. The catalyst for that team was the breakout season from Roy Hibbert. He led the team in rebounding, field-goal percentage, and was second on the team in scoring. That showing earned him his first selection as an NBA All-Star, and a four-year, $58 million max contract.

After Hibbert’s contract was finalized, Indiana GM Kevin Pritchard cautioned that his star center wouldn’t suddenly become better overnight, “Just by giving him a contract, doesn’t make him all of a sudden an unbelievably better player,” said Pritchard. “We know that he has a work ethic and we think he’ll get better. For us, that’s more important than anything—that he keeps attacking being better every day.”

This year, Hibbert is struggling to live up to his lofty contract and took to Twitter after a close win over the Los Angeles Lakers to empathize with his fans. Hibbert acknowledged his struggles and asked fans in Indiana not to give up on him yet.

“It’s round 4am n I’m laying in bed. Can’t sleep. I understand why people r frustrated with my play of late. Been having a rough stretch,” Hibbert tweeted.

The significant drop in Hibbert’s field goal percentage has been part of the offensive struggles the Pacers have been facing early on this season. But the big man down low isn’t making excuses and remains confident that things will pick up as the season progresses.

“I appreciate every1 that has stuck with me. It’s not from a lack of trying. When things come 2gether for me this year it’s gonna b scary,” Hibbert tweeted.

In the seven games that the Pacers have won this season, Hibbert’s contributions have been instrumental. He’s put up over 4 blocked shots per game and his shooting percentage hovered above 40 percent. His defensive presence has kept the Pacers in games and pushed the team to the top of the League in terms of defensive efficiency.

It’s his play on the offensive side of the ball that has been a problem.

With star forward Danny Granger out for the next three months due to a knee injury, Hibbert may be trying to help compensate for that hole in the offense by forcing shots and making the wrong decisions on offense.

Though Hibbert has been shooting poorly this season, he leads the League in blocked shots with 3.07 per game and ranks in the upper echelon of offensive rebounders. Regardless of the troubles plaguing Hibbert and the Pacers, he’s preaching patience.

“Stick with me. I’m all about winning. I said it before I want to be on the All-Defense Team. I hope to have a chance,” Hibbert said. “My offense will come.”