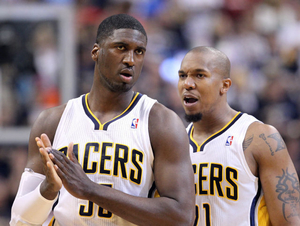 One day before the season began, Indiana Pacers head coach announced to the basketball world that his team’s goal was to gain the number one seed in the Eastern Conference, as they eyed a rematch with the Miami Heat in the Conference Finals.

Things had gone according to plan for a while, and then around the All-Star break, the Pacers began to implode and snipe at one another.

Indiana gave up the top seed Monday night following a 103-77 beatdown at the hands of the visiting San Antonio Spurs, and center Roy Hibbert (when asked about the Miami Heat overtaking his team in the standings) said the Pacers don’t deserve it anyhow.

“Good for them. We don’t deserve it,” center Roy Hibbert said in a home dressing room that was more demoralized than angry. “We’ll see, in the playoffs. But we’ve got to figure things out. Miami is a good team. They’ve had a couple hiccups themselves. But we don’t deserve that No. 1 seed.”

Indiana forward David West, who hinted at a variety of basketball and chemistry issues ailing his team now, said: “We’ve got to concede that we haven’t played basketball well enough to deserve the top spot. That’s pretty much it. We haven’t played well enough. We haven’t been a good-looking basketball team for quite some time now. That’s on the guys in this locker room.” […] “We’re probably the most downtrodden, 50-plus win team in the history of the game,” he said. “We watch film from a few months ago, we don’t even recognize ourselves.”

Said Hibbert: “We should all go to group therapy. … We’ve been spiraling. Now we’re splintering a little bit.”

The Indiana Pacers locker room sounds like a fun place these days.

Maybe Hibbert is right, this team might just need a bit of group therapy to work through their issues: George Hill and Lance Stephenson apparently had to be separated during a timeout last night.

Things don’t look good for the Pacers at the moment, but they have a bit of time to right the ship before the Playoffs begin. And, regardless of seeding, does anyone truly doubt that Miami and Indiana will again meet for another long postseason bout?

Tony Parker sure doesn’t (via the Indy Star):

“I’m not worried about them,” Parker said of the Pacers. “They’re still going to go the conference finals. It’s going to be a great match-up against Miami.”