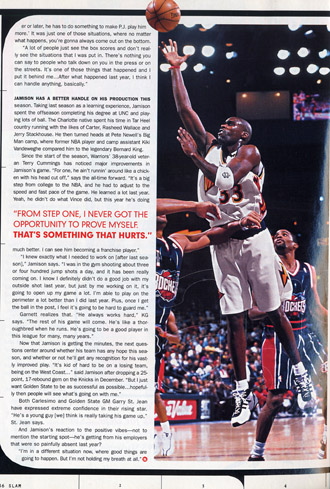 In March 2000, Kevin Garnett said Antawn Jamison will, “be a good player in this league for many, many years.” Ten years later, KG was right. After posting a career average of 19.9 ppg and 8.1 rpg while playing for the Warriors, Mavs and Wizards, Jamison’s time to get his is now. At the trade deadline he was moved to a title-contender in Cleveland, where he’ll run with LeBron, Shaq and Mo Williams. If the Cavs weren’t favored to win a championship before, they certainly are now. Writer R.R. Padilla wrote about Jamison after his bench warming rookie season, where Antawn discussed his frustrations of not playing and being able to prove his worth. The UNC alum certainly has his chance now, as he’ll be competing for a ring from here on out.—Matt Lawyue

WHEN IT COMES TO TALK OF SOME OF THE NBA’S TOP RISING STARS, ANTAWN JAMISON’S NAME RARELY GETS MENTIONED.

The ’98 National College Player of the Year at North Carolina, Jamison is far too talented to already be a forgotten man. To understand this, all you have to do is take a look at the numbers. In his first NBA season last year, Jamison received far less playing time than such rookie successes as Vince Carter, Paul Pierce and Jason Williams. While the three SLAM cover boys were averaging 35 minutes per game apiece for their respective teams, Jamison barely made it on the court for 20 minutes a game. But when given the chance to play, Jamison came through for the Golden State Warriors. The 6-9, 223-pound forward averaged 16.4 points and 9.1 rebounds and shot .538 from the floor when he logged 25 or more minutes in a contest. In his final five 25-plus minute outings of the season, he averaged 19.4 points. Average Air Canada, P Double and Slim Shady together last season and you get 15.8 points and 5.0 rebounds per.

And this season, despite a dreadful 4-16 start by the moribund Warriors, Jamison is getting a chance at both forward spots, starting and averaging 34 minutes, 17 points and eight boards per.

Numbers don’t lie, and Antawn’s digits alone should prove the he is no bust. But still, to say Jamison’s career hasn’t gotten off to a disappointing start would be a bigger fallacy than Isaiah Rider claiming he’s a team player.

In year one, the 23-year-old Jamison was ill prepared to watch from the bench while Chris Mills and Donyell Marshall ate up most of his minutes on the court. Warriors’ coach P.J. Carlesimo felt he had good reason for his rotation, as Jamison looked lost at times early in the season trying to make the transition from playing with his back to the basket in college to mostly facing the rack in the League.

For comparison’s sake, look at Elton Brand’s difficulties this season-he’s a fine player, but undersized big men need time to adjust. Regardless of Jamison’s “struggles,” Carlesimo simply felt more comfortable with the more experienced players on the floor.

“It wasn’t really that it was Jamison’s playing ability, it was that we have him, Marshall and Mills, and we were playing them mostly at small forward,” Carlesimo said early this season. “With Antawn coming in as a rookie, we decided to bring him off the bench. I thought, for the most part, he handled it very well. But it certainly didn’t help his pro-gress. Had we thrown him in the starting lineup and given him 30 to 35 minutes a game, he would have progressed at a quicker rate than he did. But we didn’t have that option, so we tried to make the best of the situation.”

Without the playing time to improve himself, Jamison became frustrated as the season progressed and he continued to warm the Warriors’ bench.

“I remember the first game, we were playing Houston and I was pretty pumped to go against Scottie Pippen,” he says. “Then, I didn’t even get into the game until like three minutes into the third quarter. Off the top, you think you’re gonna play in the first half sometime, and to just sit on the bench waiting for your name to be called, I was like, out of it. Once I got in the game, I was already frustrated.

“From step one, I never got the opportunity to prove myself. That’s something that hurts. I wasn’t worried about what Vince was doing or them other guys. It was like, ‘Yo, I’m not getting the opportunity to play.’ That was the most difficult feeling. When you know you should be on the court playing or at least be given the opportunity and you don’t get it. That really hurt me a lot last year.”

There’s a scar that runs down the side of Jamison’s face, just under his right eye, resembling the path a teardrop might make as it runs down his cheek. That scar fit well with what Jamison went through early last season.

“There were times out on the court when I felt lost, where I was holding back crying,” Jamison says. “I wouldn’t want anybody to go through what I went through last year. That wasn’t me at all. That just wasn’t the way it was supposed to be.”

Jamison first showed his old self in the Warriors’ seventh game of his rookie season. Matching up against Kevin Garnett most of the night, Jamison recorded 21 points and 11 rebounds in 29 minutes while tipping in the game-winning shot at the buzzer to give Golden State a 101-99 win over the Timberwolves. But Jamison’s supposed breakout game was anything but. Carlesimo played Jamison over 25 minutes in a game just once in the club’s next 14 contests. Jamison could only crack double-figure scoring on three occasions during that time.

“You just got to be mentally prepared to handle anything,” Jamison says, recalling his rollercoaster pattern of playing time last season. “They could tell you one thing and it could end up being a whole different situation. They were saying one thing, and this and that, but then I’m not getting the chance to play and do things. During the time it was happening, I was just like, ‘What’s goin’ on?'”

Soon, Jamison’s lack of playing time created a situation where people did not understand why he wasn’t having the type of year a player with his potential should have. Inevitably, the word “bust” began popping up when Jamison’s name was mentioned. Jamison heard the criticism and was upset that he wasn’t given ample opportunity to prove the naysayers wrong.

“The media knew exactly was was going on,” he says. “Half of the situations, it was put in my hands, and the other half, it wasn’t put in my hands. I didn’t have any say-so, and I didn’t get a lot of the opportunities that many of the rookies got last year. I think a lot of the media realized that, but they were like, ‘Well, sooner or later, he has to do something to make P.J. play him more.’ It was just one of those situations, where no matter what happens, you’re gonna always come out on the bottom.

“A lot of people just see the box scores and don’t really see the situations that I was put in. There’s nothing you can say to people who talk down on you in the press or on the streets. It’s one of those things that happened and I put it behind me…After what happened last year, I think I can handle anything, basically.”

JAMISON HAS A BETTER HANDLE ON HIS PRODUCTION THIS SEASON. Taking last season as a learning experience, Jamison spent the offseason completing his degree at UNC and playing lots of ball. The Charlotte native spent his time in Tar Heel country running with the likes of Carter, Rasheed Wallace and Jerry Stackhouse. He then turned heads at Pete Newell’s Big Man camp, where former NBA player and camp assistant Kiki Vandeweghe compared him to the legendary Bernard King.

Since the start of the season, Warriors’ 38-year-old veteran Terry Cummings has noticed major improvements in Jamison’s game. “For one, he ain’t runnin’ around like a chicken with his head cut off,” says the all-time forward. “It’s a big step from college to the NBA, and he had to adjust to the speed and fast pace of the game He learned a lot last year. Yeah, he didn’t do what Vince did, but this year he’s doing much better. I can see him becoming a franchise player.”

“I knew exactly what I needed to work on [after last season],” Jamison says. “I was in the gym shooting about three or four hundred jump shots a day, and it has been really coming on. I know I definitely didn’t do a good job with my outside shot last year, but just by me working on it, it’s going to open up my game a lot. I’m able to play on the perimeter a lot better than I did last year. Plus, once I get the ball in the post, I feel it’s going to be hard to guard me.”

Garnett realizes that. “He always works hard,” KG says. “The rest of his game will come. He’s like a thoroughbred when he runs. He’s going to be a good player in this league for many, many years.”

Now that Jamison is getting the minutes, the next questions center around whether his team has any hope this season, and whether or not he’ll get any recognition for his vastly improved play. “It’s kind of hard to be on a losing team, being on the West Coast…” said Jamison after dropping a 25-point, 17-rebound gem on the Knicks in December. “But I just want Golden State to be as successful as possible…hopefully then people will see what’s going on with me.”

Both Carlesimo and Golden State GM Garry St. Jean have expressed extreme confidence in their rising star. “He’s a young guy [we] think is really taking his game up,” St. Jean says.

And Jamison’s reaction to the positive vibes-not to mention the starting spot-he’s getting from his employers that were so painfully absent last year?

“I’m in a different situation now, where good things are going to happen. But I’m not holding my breath at all.”