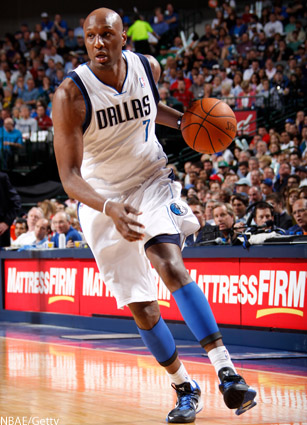 The feature below was supposed to run in the upcoming issue of SLAM, but due to Lamar’s uncertain status with the team—a rocky situation that culminated in a parting of ways with the Mavs today—it didn’t make the final cut. But you can still enjoy the piece, which delves into LO’s challenging offseason and off-the-court struggles, below. Here’s hoping the lanky guard is keeping his head up though tough times.—Ed.

Talk with Lamar Odom for a while and you can’t help but notice his voice.

Not the pitch so much as the tone—constant, unwavering, even-keeled. It’s varnished with the echoes of his native Queens, NY, and a resonance that holds as steady reminiscing about the good times as it does sturdy when reflecting on the bad ones. Spend a few minutes in conversation with him, with that voice, and you become convinced that no matter what situation Lamar Odom finds himself in, things will work out.

And mostly, despite a star-crossed path that ought to have swallowed him whole, they have. Even in a sport fraught with athletes from hardscrabble backgrounds, few are as intimately acquainted with hardship as Odom, whose climb from blacktops in project playgrounds to the lacquered hardwood of NBA arenas has been enveloped in a cologne of poverty, abandonment and loss, punctuated by his estrangement from a heroin-addicted father and the death of family members from three different generations prior to his 32nd birthday. It’s the type of furnace that’s steeled his game yet somehow spared the man underneath. Armed with far too many reasons to be resentful and guarded, Odom instead is known both for his optimism and a tendency for wearing his emotions on his sleeve.

In the nascent stages of his Mavericks tenure, however, that latter quality looks to be at odds with the former. The player Dallas coach Rick Carlisle characterizes as “a real upbeat guy” is, at times, noticeably distracted and withdrawn as he toils through what so far has been the worst season of his career, burdened by an inability to purge a tumultuous offseason from his thoughts. It’s a vexing state of affairs for a man who considers the basketball court to be his personal sanctuary, the dividing line between his private and public spheres. This time, though, the line is blurred, and onlookers are unwittingly privy to his inner struggles, only without the context of what the struggles entail.

“If I’m playing a game and I don’t look like I’m having fun, then it’s probably something more,” Odom reveals. “Sometimes that’s not for everybody to figure out, or I don’t want people to feel sorry for me, but sometimes that’s just the way it is.

It’s pretty easy to tell that something is wrong with Lamar Odom. Now, with the Playoffs mere weeks away, what remains to be seen is when things will finally come together in Dallas—or if they will at all.

That Odom’s a Maverick at all was one of the surprises of the offseason, jettisoned (depending on who you ask) by the Lakers in December following a League-vetoed attempt to send him to New Orleans as part of a deal for Chris Paul. It’s a wound that’s slow to heal following a seven-season stint that had him convinced he would retire in Los Angeles. Odom admits being taken by the move, but regardless of the circumstances, he also acknowledges he is fortunate to have landed where he did. “I’m lucky to be on a team like this, that’s playing to win,” he says. “I’m extremely fortunate coming from the situation I was in to come to Dallas. I’m extremely blessed, and it’s up to me to perform like it.”

His difficulty doing so has become a defining plotline in Dallas’ season. In his first four games as a Maverick, he shot a ghastly 4-30 and played more than 17 minutes only once, lowlighted by an 0-3, 12-minute night against the Raptors. The player renowned for making the game seem effortless lumbered up and down the court, visibly short of peak conditioning.

Corralled by reporters in the locker room after the Toronto game, Odom concedes, “You can always get an extra workout in, and right now I could use it. I’ve always been a team player. I’ve always been coachable. Basketball is what I’ve been doing all my life, so I’ve been coached all my life. So when I’m right, I keep it to myself and when I’m wrong, I can listen and get better.”

It’s a crucial insight into the synthesis of Lamar Odom the basketball player. He was the Next Magic before the Next Magic, the slick-handling, sweet-dishing forward who reminded everyone of Earvin, a full presidential term ahead of LeBron James entering the League. Yet the critics who often chastised LO for not dominating to the level of that talent overlook the mindset behind it that propelled him to such crucial status on two title-winners and an Olympic team, and why he genuinely embraces the opportunity for personal growth in Carlisle’s directive rather than taking it as a shot to his pride.

Asked what he’s most proud of as a player, Odom doesn’t speak on his own gifts but of “having the ability to make other people better, to make teams complete, being that guy that some people feel like, ‘If I have him on my team, my team will be complete.’” That the Mavericks valued him as such is nothing short of “a great honor.”

Which makes it all the more puzzling to see a player so attuned to the group dynamic appear so out of place. Certainly, on-court chemistry is one culprit; following an abbreviated training camp, Jason Kidd contends that Odom and his teammates are still “feeling each other out, trying to play off one another and getting him in positions to be successful,” while Odom himself insists that he’ll be alright “once I become accustomed to what everyone does basketball-wise.”

But the real problems occurred half a year ago, half a country away, with the murder of his 24-year-old cousin in New York followed by the death of a 15-year-old pedestrian in a car accident in which Odom was the passenger. “It was a tough offseason for me,” he says sadly before a game against OKC. “I’ve lost a lot of people close to me, to be so young; my mother, my grandmother, my son, my aunts and now, one of my favorite people in the whole wide world. My cousin was on a respirator, so I pulled the plug on him and then two days later, after I lost him… a kid was killed right in front of me.

“Seeing that shit, it kind of took me away from the game. I wasn’t really worried about preparing for basketball this summer, and it’s probably showing. But a lot of people don’t really know or understand why my play right now is a little lethargic. Obviously you can tell my mind is somewhere else, but I’m gonna keep trucking and keep getting after it until I get my zone and my focus back.”

That night provides the initial flickers of locating them. His final stats are modest—8 points in 20 minutes—but he’s demonstrably more involved in the flow of the game thanks to a reprisal of the point forward role he employed so often in Los Angeles. The signature moment, though, comes on one of his finishes, a hoop-and-harm breakaway layup that leaves him pumping his fist after the basket, finally permitting a smile to tug wide the corners of his mouth.

For the first time all season, Odom looks like he’s having fun. “That’s the most important thing,” he says afterward. “A couple of my friends—even my wife—they questioned my love for [basketball], and that will make you respond.”

Still beaming, he offers a customarily jovial assessment on the state of his game: “I’m turning the corner.”

After another spate of uneven play, he confesses to ESPN that he had to be talked out of taking a season-long sabbatical on account of the events from July, a decision he later confides to be the correct one. The road is gradually becoming less bumpy, just not as quickly as he had hoped.

His conditioning has returned, a development that turned vital when the Mavs briefly lose Dirk Nowitzki to a nagging knee injury and Odom is tasked with replacing him in the starting lineup. He responds by putting together the best stretch of games since his arrival, clearing double figures three times to help Dallas finish 3-1 without the Finals MVP.

A different four-game stretch undermines that progress, and much of the good will he’s cultivated in Dallas. One game before the All-Star break, Odom suddenly leaves the team to attend to an undisclosed personal matter and doesn’t return for 10 days. The Mavs go 0-4 in his absence, prompting Carlisle to publicly declare that the organization’s patience with him “has worn thin” and Kidd to wonder aloud whether his teammates can trust him. Gradually, one of the most affable athletes in the city becomes the whipping boy of the local media. A smattering of boos accompanies each trip to the court.

But Odom remains undaunted, determined, like always, to make things work out. He apologizes to his teammates before his first game back against Utah, asking them to stand by him because, “at this point in time in my life, I need them.” He’s yet to get on track following his return but contends that only now, following the resolution of another private struggle, is he finally able to devote his undivided attention to basketball.

“Sometimes we need everything in order, in order to give ourselves 100 percent,” he tells the media after that Utah game, a 102-96 Mavs win.

It couldn’t come at a better time. The only Maverick with multiple rings, LO better than anyone understands the pitfalls of repeating as a Champion—and that the toughest stretch is yet to come.

“I have a lot of pride even though I didn’t win it with them,” he says of his teammates. “I know what it’s like to defend it. If there’s one thing I could tell these guys, it’s that it’s gonna get harder as we go along.”

Speaking publicly after one of his better games, Odom inadvertently offers the key for how to save his season ahead of the grueling Playoff battles, and hopefully another Championship in June.

“I’ve learned in this League you don’t have to finish games the way you start them,” he muses in his soft, steady, sturdy tone.

As the NBA’s second season draws near, Dallas is depending on him to do exactly that.