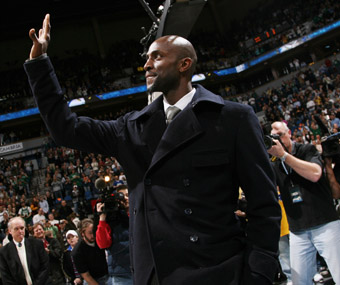 A staple of modern NBA folklore is Bobby Knight’s advice to his friend Stu Inman, a scout for the Portland TrailBlazers, concerning the second pick of the 1984 Draft.

“…Everybody knew the Houston Rockets were going to take Akeem Olajuwon of Houston with the first pick. With the second pick, Stu told me they were leaning toward Sam Bowie of Kentucky.

‘Well then play him at center’…”

It was clearly a hyperbolic statement that overstated Jordan’s abilities, while giving an accurate assessment of his value. But if someone were to have told a similar story about Kevin Garnett before the 1995 Draft, they would have simply been telling the truth.

He still had his criitcs, however.

“…The fact that he’s played in about…oh, let’s see, uh zero big time college games under the national spotlight and his likely been the largest player in nearly every high school (think about that folks, high school) game he’s been in, leaves this soon to be incredibly wealthy man child in so far over his head, you won’t even see his long arm calling for even see his long arm calling for the ball for at least three seasons. If frankly, ever.”

Hindsight of course, is lasik and it has become abundantly clear that there isn’t one thing Kevin Garnett can’t do on a basketball court. He is the game of basketball. Not just what he can do, but the way he does it. Critics saw how he beasted on high schoolers and dismissed his exuberance as the hubris of a man among boys. No one knew that he would unleash that same fury as a boy among men. A uncontainable passion that bordered on absolute need. To deny every shot. To snatch every rebound. To sink every bucket. To make any play, from anywhere. Until he became a man without peer.

During his stay in Minnesota Kevin Garnett became synonymous with versatility if he didn’t completely redefine the term. But there was one thing he didn’t do on a basketball court. Not enough for many people. Certainly not for the kind of money he made. His lack of playoff success hounded him and raised questions about his ability to elevate not only his teammates, but also his own game. Especially in crunch time. They began as a whisper and grew with every first round exit until becoming an obnoxious howl decrying missed playoffs altogether. The man who did everything was expected to do more. And as those cries rang out, their echoes reverberated into questions of loyalty. To his coaches. To his teammates. To his franchise. To winning. To money. Until he became a man without peace.

Having found early success in Boston, he is still followed by questions about his departure, its circumstances and its bounty. Questions reiterated after the celebratory histrionics of last month’s reunion. While he’d rather answer all comers on the court, this time he couldn’t. Not the way he would have wanted to. And it showed. As he exited the visiting locker room of the Target Center for the first time, flanked by cameramen, I saw his head hung awkwardly low for a man of such pride. Onlookers shouted deeply felt thanks and appreciation and he could barely look up. Not out of shame or frustration, but just as before, out of strength and humility. It was the look of a man trying to maintain composure as he headed towards half court. The spot where once again, he would be laid bare before our eyes. Kevin Garnett only did one thing on the basketball court Friday night and it was more than enough for everyone.May he find the one thing that eludes him.

*But not at the Lakers expense.