Hope for the Suns tonight 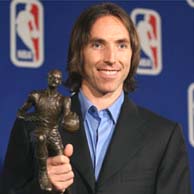 I have read, reflected, meditated, thought, laughed, cried, shouted from the mountaintop, hid in the cellar, and it is time. The Suns do have hope tonight. Sure, they are the heavy underdog as the higher seed with home court advantage playing at home in the pivotal game of a playoff series. But here we go…

The San Antonio Spurs are not the perfect basketball machine everyone makes them out to be. Sure, they have arguably the most dominant player of the post-Jordan era other than Shaq. They have speed with Tony Parker, slashing and guts with Ginobili, strong military-like leadership from Pop and PJ Carlesimo and all of those gentle souls. They have battle tested role players and shooters like Michael Finley and Brent Barry, big bodies like Oberto, and the one and only Bruce Bowen in all of his infamous glory. It seems like the perfect team to win a tough grind it out series.

Here is the thing though, and please stay with me… if you look historically at the NBA over the last 20 years, champions always repeat. At the very least they get back to the Finals. The Magic-led Lakers started it in ’87 and ’88. Then came the Pistons, the Bulls, the Rockets, the Bulls, the Shaq and Kobe Lakers, and then the Pistons were unable to win back to back but took the eventual champion to seven games. This year’s Heat destroyed that trend with the Dwyane Wyheelchair fiasco, but I digress. Who did I skip over in that 20 year period? The San Antonio Spurs. They have never been able to defend their crown. They’ve never even been able to get back to the Finals in years following a championship. Every other champion did.

There could be a “fear of their own success” factor with the Spurs. This is not a team that is the big bad villain that intimidates everything in its path. Sure, they have dirty elements to their style, but they are not some rampaging force that dominated the NBA this year. That would be the Dallas Mavericks, and where are they now?

There is no reason to believe that the Suns will slow down Tim Duncan or affect him as much as they did in game 4, but maybe Duncan will feel the pressure of having to dominate inferior defenders? He’s already had a monster 33-19 game against Kurt and Amare and Diaw. Maybe he has an off-night, and remember he is a terrible free throw shooter. Let’s not overlook that one of the greatest clutch players ever, who seems to have a magical touch, will not be there and he won’t be around for game 6 either. Big Shot Rob is the world’s greatest good luck charm at the very least, and now they won’t have that luck with them. So, the Spurs are the overwhelming favorite and must be expected to win. Kind of like Game 6 of the Finals against Detroit, when they blew that game on their home floor, and a team that was living in the midst of Larry Brown’s dramafest came one quarter away from stealing their championship. The Spurs did just blow a 10 point lead with 4 minutes left to a “soft” team.

All I’m saying is that a dominant San Antonio performance, even when they are the overwhelming favorite, is not guaranteed.

Then there is Phoenix. Chip on your shoulder, anyone? Something to prove with home fans there to go crazy in support? Pro athletes live for that stuff. Why can’t James Jones go 6 of 8 from three? Raja can get hot and knock them down too. What if Barbosa gets hot and goes on one of his one-man 20-4 runs? What if Kurt Thomas and oh my God Pat Burke (!) play the defensive games of their lives?

What about Shawn Marion? The superstar who willingly has allowed himself to blend in with a smooth running machine, yet always seems to be itching to remind us how good he is? Isn’t tonight the ultimate statement game for Shawn Marion?

And finally… yes, Amare Stoudemire is a beast who was thought of as the key factor in the series, and Boris Diaw was amazing last year and was a huge piece for the Suns this year. But the Suns do have the two-time MVP. The biggest knock on Nash when you talk about historical significance, not basketball nuts and bolts, is that he has never been to The Finals. This is a night where he can really make an impression. Stepping up with teammates out, scoring and passing, doing it all.

In summary, there is hope for Phoenix even with the NBA’s cold-hearted decision to follow the rules to the letter of the law. A lot of things have to go right for them, but it’s not impossible.

Utah: Andrei. Hey, that was some cathartic crying he did a few weeks ago.
Chicago: Kirk Hinirch