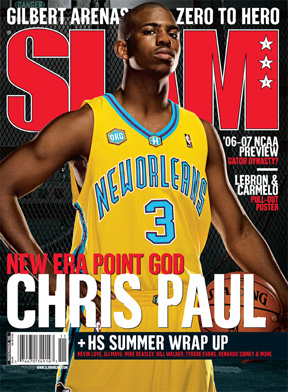 SLAM: The Hornets surprised a lot of people last year by almost making the playoffs. What does the team need to do to make the leap to the next level?

RH: I truly believe that if the Hornets stay healthy, they could win the whole damn thing. Think about it, Chris Paul is already one of the best point guards in the league and he’s only going to get better. Tyson Chandler and Peja Stojakovic are on a mission to prove they’re better than they showed last season. David West is coming off the best season of his career where he showed the potential of a 20-10 guy. Bobby Jackson will fill the void left by Speedy Claxton. Desmond Mason has apparently been reworking the weakest part of his game — his jumper — all summer long and will be looking to bounce back from a disappointing season. Re-signing Rasual Butler was underrated, as he can provide a much-needed outside scoring punch off the bench. Add to that a pair of promising rookies and some wild cards (Jannero Pargo, Linton Johnson) and the Hornets can be as good as anyone in the League, IF they stay healthy.

Unfortunately, that’s a big if, given the past medical bills of Chandler, Stojakovic, Jackson and West. Keeping everyone in uniform is the key to taking the next step, and if that happens, that step will be a big one.

Speaking of surprises, David West made a name for himself last season. How long before he’s an All-Star?

Ain’t gonna happen. He was great last season, and if the Hornets had kept that team together, West may well have made a case for the ASG in Vegas. Given the reality, expect his scoring to dip slightly now that Stojakovic is in the mix. Without a doubt, West is a vital member of the team, and I’m sure he’ll be able to bust out for some big games this season when defenses focus too much on slowing Peja. But David West an All-Star? Nah.

You follow this team closely. Just how good is Chris Paul?

During the off-season, one so-called online expert ranked Chris Paul as the sixth-best point guard in the NBA. Another ranked him ninth. Stat heads compared his rookie season favorably with that of Magic Johnson. Simply put, Chris Paul is already one of the best point guards in the NBA, and he just turned 21. He’s got the right attitude, tools and opportunities to keep getting better. I wouldn’t trade him for anybody not named LeBron or Dwyane. It’s entirely likely he’ll become the best point guard the NBA has ever seen. And, most important of all, he has two eyebrows.

How well do you see Peja fitting into Lord Byron’s system?

The two have history from their days in Sacramento, so they know what to expect from each other. That said, Scott didn’t exactly warm to the last one-dimensional European sharp shooter the Hornets signed (see: Macijauskas, Arvydas). He also rode JR Smith hard last year for not contributing defensively. Scott has addressed these concerns during the offseason, saying the Hornets didn’t promise Stojakovic $64 million to take charges and block shots. If he keeps that in mind and gets Peja plenty of open looks within the Princeton offence, it should all work out just fine.

Alright, enough foreplay, how will the Hornets fare this season?

As a fan since the days of ‘Zo, LJ and Muggsy, I know the Hornets aren’t lucky enough to go a full 82 games without enduring some significant loss due to injury. This won’t be a storybook season. It won’t be the Saints on September 25th. But the team should be better than they were a year ago. A ten-win improvement is realistic, which gives the Hornets 48 wins and a playoff berth. Chris Paul’s first trip to the postseason will be something to Witness, and if it doesn’t extend beyond seven games, consider the entire season a failure.