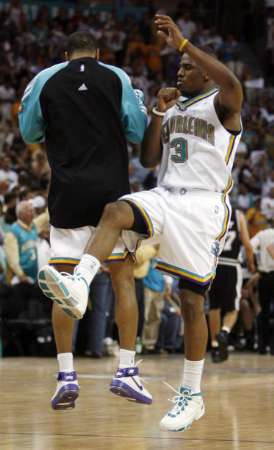 -The fan fest outside the arena features a funk band with a keyboard-guitar player. They chant “CP3” to the beat of “OPP.” Not bad.
-Saw “Ironman” today, for obvious reasons. No Ghostface cameo, and I’d like to hear Omar’s take on Terrance Howard’s performance as a sidekick.
-They upgraded us to courtside tonight. Craig Sager rocks lavender alligator loafers and I watch the end of Orlando-Detroit, where Stan Van Jeremy is in wall to wall gray. Also, what do you think Pat Ewing tells Dwight when there’s 17 seconds left? “Run!”
-A young singer, maybe 10, named Nathan Gros, absolutely kills it on the Nat’l Anthem, gets the crowd even more pumped. Hope we see him again.
Q1
-Tyson picks up his second foul with 7:00 to go in the 1st. Enter Melvin Ely, who is apparently, I dunno, coming back to haunt the Spurs?
-Bonzi puts an elbow into Udoka’s throat, draws the foul, misses both, and rocks teal wrist bands.
-Danny Glover in the house, invited by Julian Wright and Ryan Bowen.
-Another sick duo, Bonzi and Ely force Manu into consecutive turnovers. Weirdly enough, Bonzi and Krazy Kurt were the two best pick-ups after all those moves in the West. I mean, realllly weirdly. Enough.
-Glenn Dorsey gets the serious applause and might run for governor if the current LSU craze gets any wilder.
Q2-It’s 29-22 SA when the coach of the year call’s a timeout. Then Pargo drops a jumper, Ju Ju steals and hits Bonzi for an old man-strength dunk. Then Wright pokes the ball from Ginobli, who Pop pulls. The giraffe calf grabs the ensuing rebound, and buries a 3 at the other end. 31-31, timeout Spurs.-Forest “Ghost Dog” Whitaker in the building. The eyes have it when Krazy Kurt is fouled and misses both FT’s. The Knicks shoulda let him kill Steph when they had the chance. Everybody would be better off.-I tell Aggrey that the Spurs D just isn’t what it was. The Hornets seem the better stoppers, with guys like Pargo and Wright ripping balls off people. It used to be Bruce Bowen who would be ripping all the balls. He actually looks shook in this series so far.

-Spurs take the lead at the end of the half, though, with TP finishing a beautiful reverse and CP3 hitting his FT’s.

-So Aggrey’s gonna say that the “Quick Change” act is not what I hyped it to be, but I’m telling you, they just had an off night. I saw the woman who changes her clothes in a flash back in the tunnel, and I think she had a limp, mighta sprained her ankle, but played thru it. Whatever. “Quick Change” is real.

-When the teams come back out to shoot, Bonzi makes his way down to rap with Mighty Mouse, perhaps about all the times they “smoked it all up.”

-Peja buries a 3. Stephen Jackson of the St. Louis Rams, a Saints division rival, is introduced and mildly booed.

-CP3 wants Bowen bad. Every time they face off, Chris bucks and bumps, flails his arms, and then when he scores this time, to make it 54-47, he sticks his tongue out at Bowen quickly, avoiding a tech but really taunting ol’ boy. I mean, he really hates him.

-Duncan’s temper is flaring as he tries to reason with Dick Bavetta. I tell Aggrey that you rarely see an old man bitched out in public. In most real life situations, people would call you out about it, but here, the old dude just touches the giant’s wrist and goes on his way.

-I feel like Bowen is getting ready to pull some ish.

-West picks up a stupid tech by shoving Horry after a beautiful move. Then Barry misses the FT, and stupid turns into statement. We both agree that West was an unlikely choice for attitude-guy this post-season, but that’s what he’s becoming.

-Just as we’re sayin we haven’t seen much of the TCP3 4 ft alley-oop in the playoffs, they hit one, emphatically.

-Peja makes a great save. If that dude is going to play like this—hitting his shots (5/7 from 3 tonight) but also scrapping and rebounding—I don’t see why the Hornets can’t win the West.

-The crowd stands for most of the last 5 minutes. This place gets louder and louder and is flat out not the same arena as it was in November. Hard to overestimate

-With 3:00 to go, Pop pulls his starters, and Byron follows suit. Another 48 Hrs takes the court with Mike James, Pargo, and Hilton. For some reason, Bones Barry has 14 pts. Mike James hits a long jumper, then a 3, then jacks up an airball. Mental note: ask Jacque Vaughn: how does he feel when he plays against Mike James?

-Game ends, 102-84. Aggrey thinks this thing might only go 5. Seems too easy, but there’s really nothing the Hornets aren’t getting. The Spurs look a lot like the Mavs right now—a little old, pretty thin bench, not enough energy. We’ll see

-Pop responds to a reporter’s question about the big blowouts these two teams exchanged thru the regular season and these 2 games: “Yes, you’re right. You’re a very accurate young man.” That’s why I came into the media room.

-In the locker room, Bonzi is clowning Mike James for his belt buckle, which reads “Fighter.” “What’s that say, Mike? ‘Tighter?’” Which is a good name for a belt buckle, really.

-I ask Julian Wright about the difference between the reg season and the playoffs. He says there’s a lot more focus on each play, on maintaining the intensity. What are the vets telling you? “To keep it simple, do what I do.” There’s nothing simple about dude’s game, but he definitely is doing what he does and the intensity level is right in tune with the situation. It’s hard to imagine what he’s gonna be like in 3 or 4 years, but games like this are pretty invaluable.

-In the street next to the arena, a brass band blares amidst a crowd of fans who keep whooping the Ric Flair-CP3 call. It’s getting crazy in the streets of New Orleans, and in a good way.