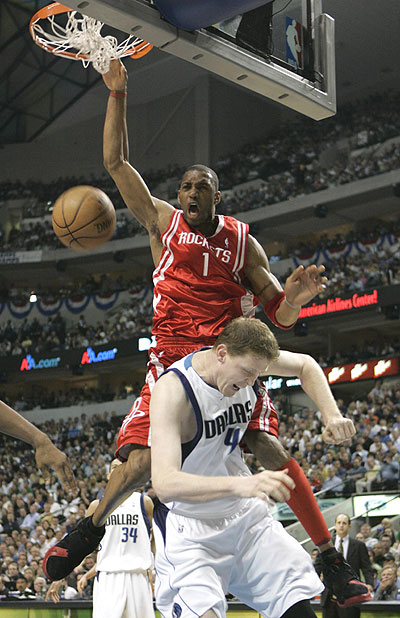 If the NBA were to choose a theme song for the first round Houston and Utah series, “Grindin” by the Clipse and Pharrell would have to be the unanimous choice, right? I suppose the NBA brass might prefer “Let’s Get Dirty” by X-Tina Aguilera, but we all know that soft pop gets no play in Van Gundy’s ride. The only other track I can think of off the top that fits the bill would be, “Bleeding from the Mouth” by the Lox and CNN. But, it’s the NBA playoffs and it’s time to grind it out, so let’s go with the Clipse.

While the majority of the league has fallen in love with the up-tempo style of play, Sloan and Van Gundy prefer their troops to earn theirs on D. This will be the most physical series of the first round and potentially, the entire postseason.

Before I get into the match-ups and storylines, it’s important to take a moment to admire the job both of the coaching staffs have done with their rosters. Utah was, by many accounts, the surprise of the season and executes their game plan as well as any team in the league. They have really gelled over the year, and Sloan has a knack of getting his troops to play at the absolute highest level.

If there’s another coach in the league that trumps Jeff Van Gundy’s desire to win a championship, that would be downright scary and borderline amazing. Van Gundy is the kind of coach you love to play for, because while he has you puking during preseason conditioning, you know the little guy with the clipboard wants that ring on his finger as badly, if not more, than you do. This is Van Gundy’s deepest and most talented Houston team. Remember when the Rockets pushed the Mavericks to 7 games in 2005? I know Shawn Bradley does.

This Houston team is definitely more polished than they were that season. They are improved on the offensive end, and a more mature Tracy McGrady has proved deferring to an upgraded Yao Ming isn’t an issue. You already know any team led by Jeff Van Gundy is going to be tough on defense and this Houston squad is no exception. Forget the statistics; Houston wears down their opponents night in and night out. That’s why this is such an intriguing series—the defensive schemes of Van Gundy vs. the calculated adjustments of Jerry Sloan.

If you subscribe to the theory that the regular season is nothing but a tune-up for April, then Van Gundy’s Rockets stand as a model for your claim. Houston has been able to battle through injuries to both of their stars, secure home-court advantage in the first round, and have McGrady and Yao playing at, arguably, the highest levels of their career. I realize it’s too late in the season for his push, but while McGrady is getting his shine on this postseason, the MVP voters will be taking notice. Believe that.

No question the NBA postseason is a showcase for superstars, and the Rockets are flyin’ high, boasting the two best players in the series with Tracy McGrady and Yao Ming. AK-47 is a terrific defender and has an opportunity to redeem a miserable regular season, utilizing his length and athleticism against T-Mac. Unfortunately for Jazz fans, I wouldn’t hold my breath. Down year or not, I ride with Kirilenko, but this is the playoffs and believe that McGrady is going to get his, no matter what.

Normally, I like what Mehmet Okur brings to the table, but the match up against Yao isn’t a good look. Okur is the type of center that prefers to step out and show his range, rather than bang on the inside. Okur is going to eat in this series because Yao won’t venture out on the perimeter and contest Okur’s shots. However, the flip side of that coin has Okur taking a beating against Yao on the block. Jazz fans are going to keep their fingers crossed that the big Turk’s stroke is on point. If it is, he will stretch the defense and allow the middle to open up for Carlos Boozer, who is currently salivating about his match up against young Chuck Hayes.

It will be interesting to see if Deron Williams is able to build on his regular season success once the playoff logo has been slapped on the court. I didn’t get a chance to watch many Jazz games this season, but from what I saw and the fantasy stat lines I read, Williams is the real deal. While he doesn’t have as many tools to work with on the offensive end as his Rucker Park counterpart Rafer Alston, Williams is going to turn some heads during the series.

I like the Rockets in five games. My prediction is more a testament of how solid I feel this Houston team is vs. an indictment of the Jazz. No doubt Jerry Sloan will use the fact that his team is being billed as underdogs as fodder to fire up his troops, but I feel this Rockets team is too talented to slip. Yao is ready for a breakout postseason, and trust me, T-Mac is acutely aware that his name has yet to be called in a second round series. This year, that ends. Houston in five. McGrady proves to a national audience what the SLAM reader already knows—his name deserves to be mentioned for the 2006-2007 MVP.