How the trades changed the game 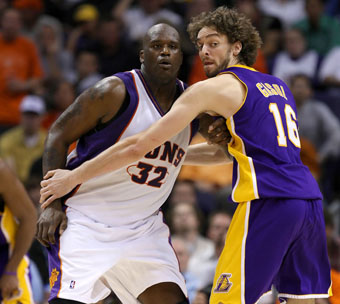 Usually I leave all the hoop talk on the site to our esteemed editors because these guys really know what they are talking about and I just like to sit back, listen, and learn. But Wednesday I was so amped after the Kobe-Shaq showdown, I just had to spit my two sense on the NBA’s current state.

At the beginning of the year when KG and Ray came over to the East side, I thought it was clear as day. Boston will win it, end of story, who’s going to stop ‘em? C’mon you thought it to.

But in the back of my mind I knew this would happen. The League would fall into a in a frenzy, and realize if the want to have any chance of beating the Celts they would need to do it with more than one superstar. Manpower is key. It’s been documented, that’s why the Bulls won six, that’s why the Lakers were so bad a$$, Shaq and Kobe, Kareem and Magic, you take your pick.

But recently stars have been separated, I guess with expansion of the league that was bound to happen, but it left players like Kobe virtually all alone, Lebron with no help in sight, A.I. was rolling for dolo until he threw a fit. Pau and KG are franchise guys but enough is enough. So they’ve made the right moves this year and man I feel like the playoffs can’t start soon enough. Once the Lakers got the athlete formerly known as “Kung Pau chicken” (he’s kind of soft remember the pinky problem? now just we call him “Pau Gasol-ina”). I knew other big trades would occur. Shaq to L.A’s rival Phoenix, Jason Kidd back to Dallas, and Kurt Thomas to the Spurs. There were other trades but they don’t need my attention. But here’s what got my attention…

Let’s get started shall we!

Kidd to Dallas… so what! I don’t think Dallas’s problem is solved, they need someone who has a strong will to win, an emotional leader, someone who can pull Dirk’s coat tail and say “Hey you 7ft German man with cannons for arms, I need you to stop acting like a WNBA player and get dirty in the post. You’re 7 feet tall for crying out loud!” They have so much firepower but they’re soft with the exception of Josh Howard and he doesn’t have the ability to take over a series by himself. Dallas doesn’t put any fear in my heart as a competitor. The only thing this trade did was make New Jersey a lot worse!

Kurt Thomas to the Spurs is pretty damn good. He’s old and effective, slow and consistent. He fits right in with San Antonio. Also it removes one of the few players who can guard Duncan. I don’t see how it can hurt them.

Pau Gasol is the best trade since Garnett came to Boston, from zero to hero in 4 seconds flat. He’s fitting right into place as a second option for L.A. It’s a serious problem when you have multiple 6-11 players that can play the 4 and the 5. Now that Lamar Odom is in his comfort zone as the 3rd option, expect him to crank it up. I’m pretty sure he’ll be more consistent again much like his last year in Miami playing behind Eddie Jones and the rising star D-Wade. Trade works for the Lakers, sucks for everybody else!

Shaq to the Suns… just give it 4 or 5 games. I’m tired of people acting like Shaq is a bum now because he’s old. Of course he isn’t the Shaq of the L.A dynasty days or even the Shaq of 2 years ago but he is still very effective on both ends of the floor… when he’s healthy. He’s older, slower, fatter, and less dominant now of course, but that only means he’s given up his super power to become a mere mortal. Clark Kent did it in Superman II! His numbers are just average now, not horrible. Once the Diesel gels with the team, Phoenix might be able to take it to the spurs and anybody else who steps in the way of Shaq winning rings.

Delonte, Wally, Big Ben and Joe Smith to the Cavs, very nice! They’ll spread the floor which can mean a few things.

1) LeBron doesn’t have to dunk on his teammates anymore.

3) Life will be easier for bron bron! This trade sort of gave Chicago what they want as well, some height in the backcourt and a pretty solid frontcourt player. I’m not thrilled about what Chicago got but it didn’t hurt us. I don’t think any of these teams will make it out the East but it’s not their fault Detroit is too real and Boston is just damn good.

I didn’t even get into the Hornets adding Bonzi Wells and Mike James, The Rockets getting Bobby Jackson and Gerald Green or even the Jazz getting Kyle Korver because that’s how much its doesn’t matter almost. This is going to be a historic playoffs comes April. So much for the Celts easy run at the championship.