If Kenyon Martin is healthy… 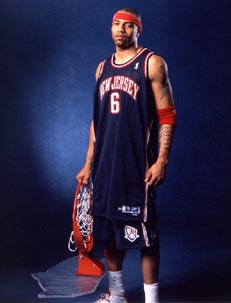 Lang mentioned in The Links that Kenyon Martin says he’s healthy, and I’d like to expand on that a little (cause guess what, today is another slow news day. Ah, the NBA summer.) Yesterday when writing about Michael Olowokandi, I was looking at some of the #1 overall picks that didn’t work out. Kenyon is not a bust as a draft pick because he was a major part of a team that got to the Finals twice, he’s been an All-Star, fun to watch, and he’s a bad ass yellow boy.

Let’s take a look back at all of the #1 overall picks since Joe Barry Carroll in 1981. I’m choosing Carroll as the starting point cause I don’t think I’ve ever heard of him before. Don’t hate, I was 3 years old when he was drafted. He made the All-Star team once, so that’s something.

Since then, the only #1 overall picks that you could say “Wow, they should have just sold the pick to the highest bidder and they would have been better off” are Pervis Ellison, Kandiman, Joe Smith (arguably), and Kwame. Pervis actually had a 20-11 season with the Bullets in ’92 and won the most improved player trophy. The “worst” players to be taken first overall in that time period are guys like Ralph Sampson, Big Dog Robinson, Danny Manning, and Derrick Coleman. Basically, if your franchise wins the lottery, you’re supposed to be set for the next decade as long as the front office doesn’t blow it (I know, I know. Big leap of faith here).

So what’s up with Kenyon Martin’s career? It seems like 20 years ago, but there was a time when New Jersey Nets fans were FURIOUS with the owner because he refused to pay anyone and they wouldn’t give Kenyon the max contract he was asking for. He had really no offensive game to speak of other than catching alley-oops from Jason Kidd. Not mad at that in any way. He was a beast on the defensive end. Remember what he did to Antoine Walker in the playoffs? The Nets wanted to keep him. They just couldn’t afford him and Richard Jefferson, and the blame went to their cost cutting owner “Bottom Line” Bruce Ratner. For whatever reason, guys that play defense but no offense just don’t get paid like guys that play offense with no defense. Unless they are really on some other level, like Dikembe with the Hawks or Ben Wallace with the Bulls. Kenyon is not a multiple time defensive player of the year.

When they lost Kenyon to the Nuggets, Nets fans were heated. Even worse, the most even-keeled politically correct player in the NBA, Jason Kidd, spoke up. He was pissed that he decided to stick around instead of joining the Robot in San Antonio. Ratner even actually admitted that he messed up. The Nets had some extra draft picks back from the Nuggets trade, and combined with Zo’s franchise guy type salary, they were able to swing a deal for Vince Carter. Soooooo… the Nets pretty much rebuilt by upgrading from Kenyon to Vince. They sacrificed defense for offense and in the eyes of many people, part of their soul. The reward has been a guy that’s an even better dunker than Kenyon was and some playoff runs that haven’t come close to what the teams with Kenyon brought them. Those fans that were so angry at Ratner haven’t been heard from.
As for the Nuggets, they were supposed to be the new beast out West. The front court of Kenyon, Camby, and Nene was going to be the roughest around, and Carmelo could just light up the scoring without having to do any dirty work. Okay, so those guys might be the three most injured players in the league, and Denver has become completely reliant on Carmelo.

Now Kenyon says he’s healthy and I’m looking forward to seeing this guy again. I know he won’t be running with Kidd, so the odds of that are unlikely. I’m just saying, I want to see it.

Of those last 25 or so #1 overall picks, I think his career can turn out most like a better version of Derrick Coleman’s. Not just because of the Nets thing, but because DC lost some of his natural ability along the way and still ended up as an important contributor on some decent teams.
Or maybe he’s really healthy and his leg will stop breaking every five minutes and he’ll be back like THIS.