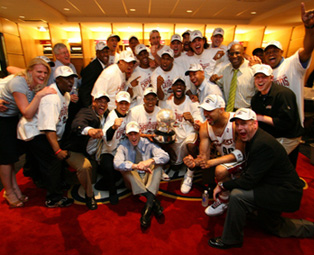 This is crazy. I can only barely believe this. This is nuts.

*Watching Kenny and Charles gang up on Reggie — those two have NEVER agreed as often as they do when Reggie’s on, because they ALWAYS jointly disagree with him — almost makes me feel sorry for Reg. Almost.

*Chris Webber has lost his damn mind. He’s been sort of below the radar the past few years, so I’d forgotten (or at least thought less often about the fact) that he’s kind of a wack-job. Please understand, I’ve liked Chris Webber since the Fab Five days, being fortunate to see that crew in person once while I was in college. His combination of game and personality was just too cool not to like, and as much as the Fab Five were about swagger and cockiness and intimidation, there was always that very obvious element of joy about Chris, on and off the court.

Not that you could’ve guessed it based on this series.

Listen, Mayce, I get it — it’s getting late in your career, and you’ve gone from being an MVP candidate to a fringe player, mostly because of injuries. Tough luck, so you’ve got some reason to be grumpy. Plus, you’re a Piston now, so you’ve got to be a bad-ass. Cool, fair enough. But the way you were acting this series, I was sort of surprised not to see “Thug Life” tattooed on your jersey. Chris? You look ridiculous. No one’s buying this. I don’t know if you’re bipolar or what (and apologies to anyone reading this who might actually be bipolar; I mean no offense), but it’s gotta stop.

The only time Chris Webber smiled the entire series was when Daniel Gibson hit him in the nuts in Game 6. I think that says it all.

*A reminder that Donyell Marshall has the most strangely proportioned body I’ve ever seen. In the second half, when Donyell thought he got a steal but they called a foul, and he went high-stepping up the court in protest? I thought that was another Madea commercial. I’m just saying.

*Ah, Sheed. We’ve missed you. Good to have you back.

*Daniel Gibson just scored 31 points in the decisive game of the Eastern Conference Finals. What the F*CK?

*Charles Barkley, postgame, on Rasheed Wallace: “He needs to grow up.” He’s 33 years old, Chuck. Dude’s as grown as he’s gonna get.

*Jake Appleman, postgame, on my cell phone: “I may go to hell for this, but I really wish Gordon Gund could see this.”

*I am really happy for LeBron James.