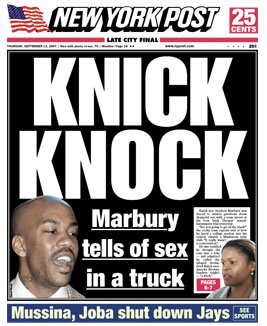 Happy New Year to all members of the tribe and my fellow chosen ones! Yesterday, despite the office being closed, there was a lot going on. Thank you Mutoni.

And what was going on? Two stories.

1) Greg Oden out for the year. Sucks. For Greg’s career. For Portland fans. For NBA fans. For everyone that spent the whole season obsessing on the Durant/Oden decision. Age jokes, Bowie jokes, world’s tallest dentist jokes are all street legal.

But I have got some light at the end of the tunnel for you. The moral of the story is that you can never tank a season, because even a sure thing is not a sure thing these days. Be afraid, Indiana Pacers.

2) Stephon Marbury. So dirty, so scandalous. I think we all see what’s going here though. Obviously the vast NIKE conspiracy to keep the Ghandi of the shoe game down won another battle. First they drug him before he goes on Mike’d up, then they trick the media into misquoting him about how Mike Vick is the Vicktim (heh heh heh), and now this.

If you’re over 17 you can read about it here. I’m linking to the NYPost version cause this story was made for them. There are so many dirty quotes packed in there, it’s hard to pick a favorite. But this harmless little excerpt catches my eye for some reason:

The hoops player then left the court grinning ear to ear and hopped into an elevator with a group of reporters, saying, “Man, money makes you do crazy things.”

Then the star paused and weirdly added, “I’m talking about that man who tried to jump off the thing for the cash.”

I suppose this is laying the early groundwork for an insanity plea when Steph is eventually on trial for something of his own. What in God’s name are you talking about Stephon Marbury?!? Can anyone make sense of this? Who is that man? What is the thing he tried to jump off? Did he succeed?

The “funniest” part is that Steph is giving off the appearance that he’s not even one percent concerned. I’m not convinced he even knew he was in a courtroom. And Isiah don’t give a F about no white people. Where is this whole thing going? How can it possibly get any better?

Back to the sports played on the field. This might come off as a little too revolutionary for some of you, but it turns out that pro sports is entirely about money. Don’t shoot the messenger, I’m just speaking the truth. So, the only thing you need to concern yourselves with in sports this weekend is my fantasy baseball team. It’s playoff time and I made the cut. A win this week, and I’m guaranteed $400 with a chance to play for $1,000. This is very important to me.

The most overlooked story in sports all year has been the mysterious disappearance of the global power capable of obliterating an entire hemisphere, known as PRONK. Travis Hafner for the uninitiated. Those of us who have had him on our fantasy teams all year have suffered, waiting for the eruption. Finally it seems the volcano is active and PRONK is back to launching his signature 550 foot cruise missles. Keep his bat in your prayers this weekend. The same goes for: Brian McCann, Carlos Pena (the free agent steal of the year!), Rickie Weeks, Yuniesky Betancourt, Miguel Cabrera, Raul Ibanez, Lance Berkman, and my affordable Matt Kemp/Jeremy Hermida platoon. Tonight I’ve got my aces going, Chris Young for the Padres and Black Sabbathia for the Indians. I apologize for violating the first commandment of writing for public consumption which is “Thou shalt not talk about your own fantasy team because nobody and I mean NOBODY cares”, but come on, it’s the playoffs and I’ve got two aces showing. I won’t be able to watch any baseball tonight cause I bullied this girl into having a rooftop party at her place. A big night from my team, and I could very well transform into the man who jumped off the thing with the cash. Send your positive vibes towards my team. Give YOUNG MOISES his power!

And finally, I know the Greg Oden thing is a big deal but let’s not gloss over another sidelined performer who is in the hospital. While the world lamented the downfall of Britney, how horrible the VMAs were and MTV is, there were still some quality acts on there, such as the mighty MASTODON. Guitarist/singer Brent Hinds got into a little bit of a tussle shall we say, and he’s got a head injury and two black eyes.

If you’ve never heard their music, please don’t judge by the song or performance from the VMAs found within that story. It’s their closest attempt at doing something poppy. Friday! Got to love it.