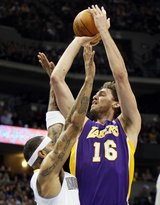 Despite being physically unable to take part in any game, let alone the All-Star bonanza, Yao Ming was neverthless voted in by his legion of fans as the starting center. Now, a replacement must be found.

The leading candidates for the spot are Pau Gasol, and some may even argue, Tyson Chandler. Gasol is being non-chalant about it; Chandler, though, is pushing hard to play on the big stage.

The Press-Enterprise and Star-Telegram have the quotes:

Chandler, who amazingly wasn’t even on the All-Star ballot this year, is hoping someone will notice his solid contributions to the Mavs and find a way to make sure he locks up a spot on the West squad. “It’s not up to me, it comes down to the coaches,” Chandler said. “I just hope they look at what I’ve done this year for my team, and I hope they look at it that way … It would mean a lot to me (to make the West team), being my first time,” he said. “If it happens and for me to able to play in front of my friends and family in LA, it would mean an awful lot to me.”

Chandler averages 9.6 points, 9.0 rebounds and 1.22 blocks for the 30-15 Mavs. Among Western Conference centers he is third in rebounding, seventh in scoring and eighth in blocks..

“It’s not my call,” [Pau Gasol] said of a possible replacement for Yao. “One player or another it doesn’t matter. … Who makes that call? Commissioner picks. You’ve got to call him up. I can’t call him up.” [Gasol] did agree ‘there’s a chance” he could be picked.

Gasol has the clear and obvious advantage over Chandler — his stats are inarguably more impressive in every meaningful category, the Lakers have a better record than Dallas, and um, the All-Star Game is being played in L.A. It’d be shocking if Pau didn’t get the nod.

Tyson Chandler’s battle will be to get in as a backup big, with competition coming from Andrew Bynum, Emeka Okafor and Nene.