Indiana Has Had Enough of the Jamaal Tinsley Experience 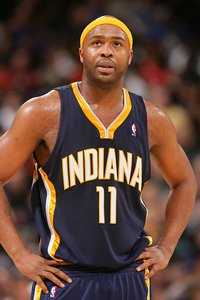 NBA executives, for the most part, are a fairly tactful bunch. Always deathly afraid to say the wrong thing, or anything that may come back and haunt them, they normally fill up reporters’ recording devices with platitudes and empty clichés. And obvoiusly, this is a good game plan to have if your job is to steer a multi-million dollar corporation.

Herb Simon, co-owner of the Indiana Pacers, is a pretty upfront guy however – at least when it comes to Jamaal Tinsley. And as far as he’s concerned, Tinsley has played his last game as a Pacer. From the Indy Star:

“Tinsley, he’s probably outlived his welcome here,” Simon said. “He’s a very talented player. Teams will give us a hard time because they know it’s better for him and for us to have him play somewhere else. We’re confident that we’ll find a good place.”

“We think he’s too talented of a player to not play again, but he’s better off somewhere else,” Simon said when asked again about the possibility of Tinsley staying away from the team if they can’t trade him.

In only 39 games last season, Tinsley averaged a little under 12 points and racked up roughly 8 assists (while dribbling the ball between a defender’s legs about twice per month.)

The 30 year-old point guard’s trade value, though, thanks to his boss’s candidness has just dropped considerably.