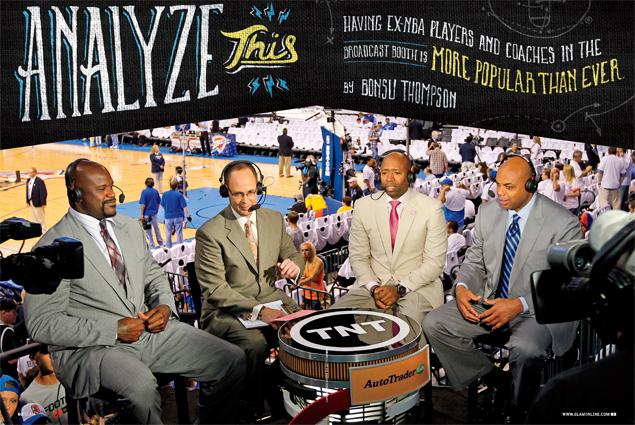 Almost three decades ago, the late sportscasting giant Howard Cosell derisively used the term “jockocracy” when he took his loathing of the new trend of athletes moonlighting as sports media public. One by one, retired players were streaming their way into TV broadcast booths—Bill Russell, Frank Gifford, Ahmad Rashad—and Cosell, via his 1985 book I Never Played The Game, made it clear he wasn’t for any of it. His opinion: Sports telecasts that included jocks were dimmer in journalistic quality. Well, today, Cosell must be rolling around in the ground as the number of former pro athletes—and, most relevant to SLAM’s audience, former NBA players—grabbing network jobs in and out of the studio has the jockocracy at an all-time high.

No longer are players and coaches, active or inactive, relegated to guest slots. Not only are TV talent producers more aggressive than ever in booking the former pros, but both regional and national networks are now placing entire programming on the backs of League alumni. The best example is TNT’s Inside The NBA, built on the “been there, done that” seasoning of two-time NBA Champion Kenny Smith and Charles Barkley, one of the NBA’s 50 Greatest Players, with some insights from Shaquille O’Neal thrown in for good measure. ABC’s NBA Countdown isn’t led by former Washington Post columnist and Pardon The Interuption pundit Michael Wilbon or leader of Grantland, Bill Simmons, but instead the hip-hop loving, former Fab Five member/NBA guard Jalen Rose and living icon Earvin “Magic” Johnson. Wilbon and Simmons literally play the side. That today’s athletes are more assertive in landing on TV also deserves some attention. You don’t even need superstar status to apply. “Probably the last four to five years of my career, whenever [my team] was on ESPN or TNT, I would always make it a point to talk with announcers and meet producers to let it be known it was something I wanted to do [post retirement],” says ESPN game commentator and former player Jon Barry. “It’s a way to stay around the game you’ve known your whole life, but you don’t have to work out. That’s what I like the most.”

This influx of talent can be traced to the late ’90s, when the NBA broke their allegiances off with NBC. This allowed Turner Network Television, which had been broadcasting NBA games since ’89, to up it’s “A” game. Then, in ’02, ABC, which is linked to ESPN via Disney, solidified a rights deal with the League. But it was Turner that sought to induce ratings with sports credibility. Kenny Smith was 45 minutes into the 11th hour of his career when the NBA on TNT began sizing him up. “Kenny came in [as a studio guest] between 10-day contracts,” tells Inside The NBA host, Ernie “EJ” Johnson. “And the producers and I would say, ‘Man, when he’s finished, this guy could be a natural on TV.’”

Problem is, Kenny had no interest in a desk job. “Honestly, I didn’t take it seriously,” remembers Smith. “I thought I was going to come back and play or go into coaching. But Craig Sager came up to me one day and said, ‘Why are you thinking about doing anything different? You’re really good at this. This could be your career. You could really make a difference in television.’”

The value of professionals analyzing a sport they’ve spent their lives attempting to master is obvious. Unattainable to the most seasoned journalist is a pro’s treasure trove of insight and perspective. Albeit, the delivery of that vision and nuance is where an athlete can devalue a telecast, where the root of “jockocracy” exists. To borrow from Walt Frazier’s Clydeisms, viewers witness a ton of “stumbling and bumbling” when an athlete is learning TV on the job. Improper English is glossed over. Freudian slips are pardoned as locker room humor. Journalistic purists grumble that jocks regress sports media to barbershop and pub levels. “Basketball is something we definitely know about,” says current TV analyst, and former UNLV and NBA PG, Greg Anthony. “But most of us don’t know a damn thing about television.”

Tim Scanlan, ESPN’s VP of Talent and Production, agrees that there are some unsteady former athletes commentating on television, just not at his network. “We try to hire the very best out there—the most relevant, opinionated, informed and intelligent voices as possible.” That Scanlan began his qualification for the best on-air talent with “relevant” ushers us to the root of the media’s proclivity to hire players and coaches. For the most part, professional athletes are celebrities. Stars boost ratings. With the sport of basketball growing internationally and the Internet a new world power, it would be in any brand’s revenue interest to hire an expert who brings mammoth fame and a social media reach. While Scalan admits to hiring in a “strategic manner,” some critics side-eye the employment process as more casting than vetting. “I think it absolutely has to do with showbiz and being recognizable,” says New York Daily News Sports Media Columnist Bob Raissman. “But you have to be able to deliver information. Magic Johnson is one of the biggest marquee guys and while we respect him for what he’s done, I don’t think he’s the world’s greatest analyst.”

Network execs gingerly admit that celebrity is considered as much, if not more, than experience and fan credibility when selecting on-air talent, but they sidestep the notion that sports stars are given star treatment—sometimes coddled, most of the time handheld. ESPN anchor Hannah Storm, who, along with Bob Costas, was the face of NBC’s NBA coverage for 10 years, feels the extra coaching that ex-jocks require is a trade off for upgraded sports analysis and more succinct telecasts. “I don’t think there’s anybody better qualified to break down an NBA game than a former player or coach,” she says. “I think it’s great for sports TV. Now it might be the hot thing to have former athletes on telecast—and rightfully so—but you still need the other parts to make a smooth and complete broadcast. So my job as a studio host is to make anybody who comes in here look really good.”

“That wealth of information from having played the game is invaluable,” Ernie Johnson echoes. “If you’ve put your time in on the court and you’ve got [broadcast] skills, you can refine them on the air.”

Studio vets are often defensive of the retirees under their wing because those are the new stars of sports media—the ones with natural talent and, the most essential intangible, a dedication toward becoming an esteemed journalist. These are your Clark Kelloggs, your Chris Webbers, your Jeff Van Gundys. “Nobody likes to be the bearer of bad news,” says Anthony. “But I always tell people, Listen, I’m an athlete. I don’t look at it as bad news. I want you to coach me. I want you to help me get better.”

That ballers-turned-broadcasters are on TV discussing their life’s passion along with sports news being designed to “edu-tain” together conceives a global misconception: ex-jocks are just shooting the gift. Anthony puts things in perspective: “It’s one thing to sit at a bar, watching the game with your friends and talk about what’s going on, but it’s vastly different when you’ve got a producer or director in your ear counting you down and then you have to make this clear, concise point in six seconds.”

“People assume it’s an easy transition and don’t fully understand how [Charles and I] got to where we are,” says Smith. “Our formula was unique. It started with recruitment and talent recognition. The second part was the work ethic.”

Like in any skill field, not everyone is cut out for the big leagues. Same in sports media—you have those who fill out rosters and the exceptional who fill up stat sheets. Once you get past an ex-athlete’s natural charisma and willingness to be taught, the real work begins. The long hours of statistical research, watching film, traveling. Often the retired realize that they quit being away from their family and studying endless game tape just to continue in a different setting. EJ admits that back in 2000, this was a strong concern of his. “When Charles joined us, my biggest concern was, When the novelty wore off, was he still going to want to do this? And that was put to rest in his first season.” Storm affirms: “Usually the guys who are around year after year are guys who are willing to do the work that it takes.”

There’s also the task of a former pro being an actual critic, of assessing and opining on the strengths, weaknesses and errors of proud men, many of whom are still peers. Honesty is the main ingredient in any valid critique. The truth can hurt just as well as its absence can. “The problem with former players is when they pull their punches,” says Newsday sports business and media columnist, Neil Best. “Fans can see through that pretty quickly. You’re not going to rise up in the ranks if you’re not willing to be critical.” Not every former athlete owns the southern spheres to throw a guy, whose wife is besties with theirs, under the bus. Those who can help to separate the journalists from the jocks. “I can’t speak for everybody, but I have to be honest,” says Barry. “I think if you’re not true and honest about things, you’ll get snuffed out.”

With each major sport owning their very own round-the-clock sports channel, website and radio channel, and every TV network building a sports division, viewership competition is at an apex—off and online. There’s CBS Sports and NBC Sports (this August FOX will launch its own all-sports channel), but regional stations, too, are slapping ties on ex-jocks at an increasing rate (cut your teeth in the D-League, hope to go national). The popularity contest in broadcasting is among us like never before, and it’s not relegated to hoops. How would football broadcasts be if they’d never had John Madden? What would a Mets game be without Keith Hernandez? “They don’t pay us to be right,” says Anthony. “They pay us to have an opinion.”

So although the source of jockocracy is at its historically largest state, its stock is at its lowest. Fact is the retired athlete in the studio and mid-courtside today is unequivocally of a different breed than those who were active with Cosell. “These guys are more sophisticated than ever,” says Best. “Like Bill Russell was a fairly popular analyst when I was a kid, but I’m sure if you listen back to tapes of him you’ll see the current generation is far better. These guys are media pros now. It’s gotten to the point where it’s kind of odd when you don’t have a former player as an analyst.” 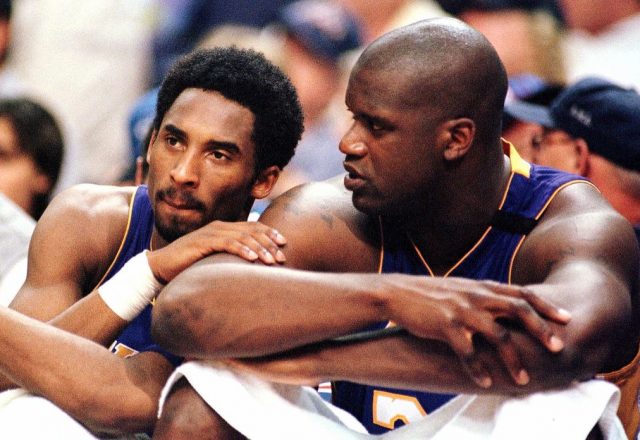