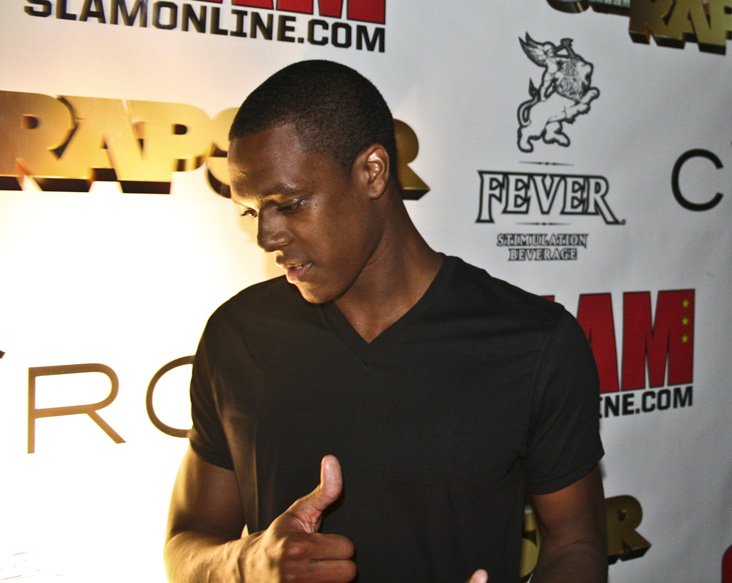 Before you read this post, you need to cue up Jay-Z’s “Empire State of Mind” on your iPod, MP3 player, laptop speakers…heck, even your Radio Raheem boombox if you have to. Because the SLAM Mag party at Slate was so official, you need theme music just to even read about it.

Got the music? Good.

With the city still abuzz from Nike’s inaugural World Basketball Festival that covered everywhere from Radio City Music Hall to the Rucker to the Garden, basketball connoisseurs flocked to the Flatiron District Saturday night (August 16) to experience how “the best source in basketball” gets down after hours. To piggyback on J.Cole’s quotable verse, “Jordan was like Jesus, SLAM was like the Bible,” we straight up gave a sermon on how to throw the kind of star-strewn shindig that’s a magnet for throngs of NBA All Stars, Nike reps, NBA reps, agents, moguls, models and, of course, the glitterati.

The two-pronged celebration started early (9 p.m.) with an invite-only reception dinner that included a sneak peek and play of Def Jam Rapstar (October release), finger licking-good food and free flowing drinks compliments of sponsors Fever Energy Drink and Ciroc.  By midnight, the club was teeming with an army of athletes, industry machers and beautiful people from Manhattan’s in-crowd, making it the party of the weekend.

Thanks to P.R. guru Rochelle Brown of V Firm PR and her team: Christina Clark, Kasheena McDonald and Adonis Spicer and Henry “HenRoc” Polanco, VP of Promotions at Bad Boy Entertainment, the stage was set for a night to friggin’ remember. Ms. Brown Danny Duberstein’d the hell out of the party.  Freakin’ voilà!  She and her team put in mad work to make the event a raging success. We love you Ms. Brown!

Comedian Anthony Anderson, who served as host for the WBF opening night game at Radio City Music Hall, was celebrating his birthday with us, as was my main man Joe Branch, formerly of Nike and the NBA (shouts to Jerry Sawyer, Molly Pross and Courtney Hill). My born day was earlier that week, so I let loose as well, tossing back glass after glass of bubbly like I was practicing to be a sommelier.

The highlight of the night had to be when NY Knick Amar’e Stoudemire flowed in and chopped it up with Ben Osborne at the step and repeat near the entrance. DJ SNS shouted SLAM out all night (SLAM Team in House: Me, Ben, Jake Appleman, Eddie Maisonet III, Sean Brown and Ramon De Los Santos) and showed mad love to the players and celebs in the house. The laugh of the night came courtesy of Jake, who talked his way into the soiree despite showing up decked out in shorts, sneaks, tee and backpack.

As thick as the party was on its own, it seemed as if those in attendance began texting and BBM-ing friends because by the end of the night, the party had swelled. Rondo was able to hang out with us and still break multiple French ankles the next day. DJ SNS had the party rockin’ into the wee hours as quintessential, hype New York parties tend to do, but it didn’t stop the show the next day.