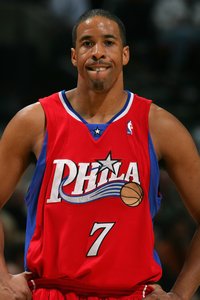 The career of one Mo Williams in a Cleveland Cavaliers uniform has gotten off to a rather feisty start. After a couple of hard fouls, and some repeated jawing with the Sixers’ Andre Miller on Saturday night, Mo’ Money was thrown out of the game.

With the teams set to battle again tonight, this time in Philly, Williams isn’t exactly acting as though his little tiff with ‘Dre is water under the bridge.

“He can call me. We can go to dinner, and we can square it out,” he said jokingly. ”I can give him a hug or something. Maybe he needs a hug from me, I don’t know.”

How amazing would it be if Mo tried to give Miller a hug right before tipoff?

This isn’t the first time Williams and Miller have had beef; when Mo was a Buck, they had a similar incident to the one that took place on Saturday. The game tonight should certainly be interesting to watch.