For more than a decade, Kyle Korver has been spreading the court out for his star teammates. Now the otherworldly shooter is getting some star treatment of his own. 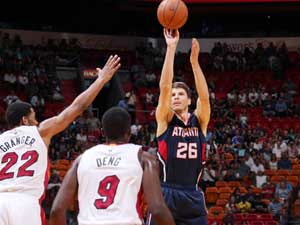 Babies couldn’t care less about editorial deadlines. Well, Kyle Korver’s baby couldn’t. SLAM had been trying to score an interview with the Atlanta Hawks shooting guard for some time, but the team’s media relations department could never commit to a day because Korver’s wife, Juliet, was expecting to give birth to their second child at any moment.

Just when we were about to indefinitely postpone the story about the deadeye shooter on the cusp of national stardom, the Hawks suggested we try our luck at the team’s media day. Not a bad idea. Newborns don’t typically disrupt interviews in the practice gym, do they?

Those are a Hawks flack’s words on the aforementioned media day, not Korver’s. The daddy-to-be is actually at a small table in full uniform, answering questions about the team and embattled GM Danny Ferry as calmly as possible, considering how he may have to rush to the hospital at any second.

Media day comes and goes, no baby. So does the next day. And the next. In fact, a healthy Knox Elliot Korver doesn’t arrive until the afternoon of October 4, about a week after his due date.

The 33-year-old Korver knows all too well about things taking their time to develop. After suiting up for four teams over the course of 11 seasons, the Hawks starting 2-guard is only now getting the national recognition his game has long deserved.

Fifteen years ago, very few people knew about Creighton basketball. Most folks couldn’t even find the campus on a map. Before Kyle Korver’s arrival in 1999, the school had been to four NCAA Tournaments over the previous 20 years. The Bluejays’ biggest basketball names were Paul Silas and Benoit Benjamin. Needless to say, Omaha, NE, was not the epicenter of the hoops world.

Around 2003, though, some of that started to change. “We were moving from our old arena, [Omaha] Civic Auditorium, to what was at the time the Qwest Center,” remembers 17-year Creighton assistant Darian DeVries. “Kyle’s senior year, that build-up to it, we had never had anyone nationally get it. He put Creighton on the map as far as people recognizing the name a little more.”

But Korver, a native of California who moved to Iowa in the sixth grade, wasn’t heavily recruited out of high school. Though he had better range than T-Mobile, schools weren’t sure if anything else about him stood out. “The one thing I don’t think anybody gives him the credit for is just his energy level—defensively and off the ball,” adds Coach DeVries. “His leadership qualities are off the charts [as well].”

Each season, Korver’s all-around game got better. His scoring average rose from 8.8 ppg his freshman season to over 15 his junior one. By the time he was giving the Missouri Valley Conference nightly migraines as a senior, Korver was posting almost 18 points, 6.4 rebounds and over 3 assists per. The Bluejays won 52 games during Korver’s final two campaigns. He grabbed a couple of MVC Player of the Year honors, too. A shooting star was born.

“But for any of us to sit here,” Coach DeVries continues, “and say [we knew] in his freshman year of college that he would go on and play in the League and have a long, very productive career, we’d be lying. But he worked so hard at it and just got better and better at his craft every year.”

The Philadelphia 76ers, via a trade with the New Jersey Nets, drafted Korver with the 51st pick in ’03. He made an NBA-high 226 three-point shots in ’04-05. He paced the League in free-throw shooting (91 percent) in ’06-07. He moved on to Utah after that. Kept shooting. Played a few years with Chicago after that. Shot some more. Was traded from the Bulls to the Hawks in 2012. Led the Association in three-point percentage a year ago. And hit eight of his first 10 threes to start this season.

“As far as guys who I watched playing and shooting the ball when I first came in, Reggie Miller [was one],” Korver says. “I remember watching how hard he worked before a game. And Ray [Allen] is obviously like the standard for most shooters. I love Peja [Stojakovic]. I loved how he shot. I put a little swoop in my shot for a minute [like Peja], which was a big mistake. I like watching Rip Hamilton, how he moved without the basketball. That’s been a big step for me in my career. You try to find bits and pieces. I never tried to, like, model myself after just one person, because I feel you do yourself a disservice when you do that. But there are just so many guys that you try to pull things from.”

Korver’s teammates know exactly what he’s talking about. “I want to be the African-American Kyle Korver,” says fellow Hawk DeMarre Carroll. “Kyle is always a positive person. He’s straightforward. His preparation for the game shows guys like myself that you gotta prepare for the game like it’s your last game, like it’s a championship game.”
We don’t officially know when Carroll’s crush started, but if it began anywhere around November 4, 2012, we’d understand. “The Streak” commenced harmlessly enough that night. Then it went to 25 straight games with a three. Then 50. Then 75. Then 90, passing Dana Barros’ record set back in ’96. By the time the stretch got to 100, even usually stoic Philips Arena buzzed every time No. 26 attempted a trey.

The 127-game streak gave folks who didn’t know much about Korver reason to care. When they started digging, they understood what Coach DeVries long knew—the man had a relentless motor, believed in solid defense and knew how to lead.

“Korver is my mentor on the team,” admits 23-year-old Hawks guard John Jenkins. “He works out in Santa Barbara at P3. I work out in Santa Barbara at P3 in the offseason. I see him a lot, just talking to him, picking his brain. He’s played 10-plus years in this League, so everything he says, I listen to for sure. Everybody saw what he did last year as far as breaking the record and that’s very inspiring for me.”

“I’m one of the older guys,” Korver grins, “so I think that automatically puts you in some kind of a leadership role. I’ve never been one who has wanted to force leadership. You don’t want to be trying to tell everybody what to do. You try to pick your spot, and when the spot arises, you try to have something good to say.”

It’s that mix of leadership and lethalness from deep that the NBA can no longer ignore. To illustrate this point, Team USA formally invited Korver to try out for the US National Team before the 2014 FIBA World Cup. He made it to the final cut. Sure seems like the kid from Creighton has finally arrived.

“It makes me a little nervous,” Korver says of the newfound attention. “I’ve never been in that kind of situation before. It’s awesome. I’m proud that things are happening this far into my career. I wasn’t ready for it three or four years in. I think now that it’s happening 10, 12 years in, [I’m ready for it].”

Kyle’s patience isn’t a shock. He had to wait on a college to recruit him. He had to wait on critics to realize he was more than a one-dimensional player. Hell, he had to wait on his kid’s birth. He’s been waiting his turn seemingly from the start. But waiting ain’t so bad if there’s something for you on the other side.

“It’s good that it took the work,” Korver says. “[Recognition] wasn’t done just on natural talent. It was hard work. So, part of that feels good. But at the same time, you gotta be able to keep your edge. If I lose my edge, I’m not a very good player. I just want to keep on working and keep trying to do better.”