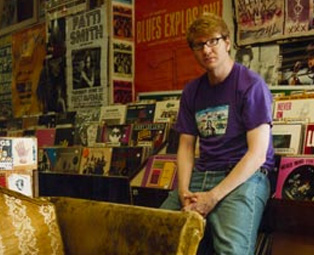 Chuck Klosterman sits in the corner of a Cambridge, MA theatre, flipping his frazzled dirty blonde hair out of his eyes as he feverishly scrawls his signature in a stack of his two-week-old Chuck Klosterman IV. The opening chapter of the new book is the first (and to-this-day, only) profile and sit-down interview to publicly defame Britney Spears. Minutes ago, he finished up a Q&A in which he debated that the bands Foghat and Yo La Tengo are one and the same. This Q&A was cut off because some of his audience was waiting for that night’s screening of a movie about a fictitious set of siamese twins, joined at the head, who were groomed since infancy to join a ’70s metal band.

This man should know nothing about basketball.

“LeBron, Kobe, Wade, Nowitzki, Garnett.” He spews out his version of the NBA’s top-five like it’s his social security number.

“Oh,” he jumps. You’d think he omitted his sixth child. “And Duncan. If he’s healthy.”

OK. This guy knows everything about basketball. (He does write for ESPN.com, after all.)

For those unacquainted, Klosterman is the definitive voice of Gen Xers, or the Real World Generation, or whatever back-of-the-book critics call today’s pop culture. They dub him things like “strikingly self-aware” and “magnificently post-modern,” which basically means he has the innate ability to sift through an Entertainment Weekly, pinpoint the next LFO and the next U2 and make sure to only interview the next U2.

He brought to light the trashy family aspect of the aforementioned Britney Spears long before she ever married Kevin Federline, revealed her nasty smoking habit and gave birth to/almost killed her baby. He profiled Steve Nash before he was a two-time MVP and surefire Hall-of-Famer, and talked to him about the merits of socialism. He interviewed Mike Skinner from The Streets when the idea of British rap was considered adorable.

He’s not psychic; he’s just good. He can either predict or help create what sticks in today’s culture. But, of all things, this guy in faded jeans who was just answering questions about Twisted Sister would much rather talk about basketball.

“I don’t know if this is the new ‘Golden Age of Basketball,'” he says, “but it’s easily the best its been since the middle-80s.”

Klosterman is one to talk about the subject, too. He’s been following the sport since childhood and always finds a way to mix it into his prose. In his 2003 collection Sex, Drugs, and Cocoa Puffs, Klosterman devoted an entire chapter to NBA officiating. It even helped him get a job once. He won over a potential employer, a Scott Skiles fan (the point guard, not the coach), by filling an interview with nothing but Michigan State Spartans facts.

“People overestimated the idea of the ‘team concept’ (in this year’s playoffs), so when it got to Wade and Shaq (in the Finals), you get to that last tier, and it’s who has the guy that the other team can’t stop,” he says, then takes a pause for effect, as good writers sometimes do. “Miami had that guy. The best teams in the East next year are going to be Miami and Cleveland — two teams with guys no one can stop.

“And I kind of like it that way, don’t you?” Klosterman asks, always engaging.

In his recent book, along with that Steve Nash profile, he interlaces Larry Bird and Isiah Thomas with George W. Bush and Hillary Clinton, Mia Farrow and Phillip Roth, and Batman and Superman to help you narrow down your exact arch-enemy. But doesn’t that setup run-and-gun teams like Nash’s Phoenix Suns to be Klosterman’s basketball arch-enemy?

“No, I’m not anti-Phoenix,” says Klosterman. “I actually love Phoenix and they’re the same in a weird way. I like watching Nash because Steve Nash is everything to that team. Amare (Stoudemire) has a lot of bang; Nash is that one guy you can’t stop.”

In fact, for a guy who is supposed to be the voice of a generation, this beard-stroking proselytizer thinks this New NBA should be a part of it. Whatever this generation is.

But can’t some of them be overhyped? Is it possible they’re just faking a couple of seasons of greatness? Isn’t there a chance one could be a Mitch Richmond, or a Glen Rice, or an LFO?

“Naah, it’s not really hype. They tried to do that in the mid-’90s. You can tell,” says Klosterman, with another dramatic pause. At this point, whatever he says next will be right. This guy knows how to pause. This guy knows the future. Most importantly, this guy knows basketball.

“When somebody’s the real deal,” he says, “you can tell.”