Interview with an All-Star Dancer 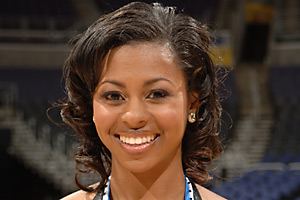 This past Wednesday I finally got a chance to sit down and chat with All-Star dance teamer Crystal. For those of you who haven’t been following my exploits at Wizards games (you better get on it!) let me give you a quick background. In one of my reports a few weeks ago, I jokingly mentioned that the All-Star Dance Team voting needed better promotion because I had never heard of it and that instead of wasting my time voting for Arenas and Kobe, I could have been voting for Crystal. Well, someone in the NBA offices got wind of my comments and called up Slam with the idea of me talking with Crystal, the winner from the Wizards to help boost the All-Star Dance Team publicity. Lang hit me up about it and let’s just say choosing to interview an attractive cheerleader is an easy decision to make. Hope you guys enjoy it.

The first thing I noticed about Crystal, besides that she was real tiny, was that she came into the room quoting the lyrics to ‘Can I Live.’ Being a hip hop head, any female preferring Reasonable Doubt over Jay’s later works is alright in my book. As we got acquainted she looked at my credentials and asked my last name. Come to find out we have the same last name and are probably long lost fifth cousins twice removed but that’s another story for another time.

Slam: Besides a free trip to Vegas what’s the best part of being an All-Star Dancer?

Crystal: The best part of being an all-star dancer is being able to dance and entertain that many people at one time. Not only that but you get to work with 29 girls from other teams. Being an NBA dancer you only work with the girls on your team and you never get to see the girls from other teams. They’re always on our website and we’re always on theirs trying to figure out who’s who, what they wear and what they do..

Slam: And to talk a little smack to the competition?

Crystal: Ha ha, it’s not really competition you’re just curious to see what other people are doing. So [going to Vegas] is a great opportunity to meet 29 other dance team members that share the same experience as you, just in a different city.

Slam: Are you allowed to bring anyone?

Crystal: Oh no, I’m bringing myself and my books so I can study.

Slam: How did you get nominated in the first place?

Crystal: Well, the Washington sports office nominated three girls based on different aspects. I’m not really sure what they were. Then Myra, Jennifer and I were posted on the NBA website and then we had fans go on and vote and whoever got the most votes got to go to Vegas and represent the Wizards dance team at the All-Star game.

Slam: Did you take a page out of Gilbert’s book and vote for yourself a few times? For a free trip to Vegas I would have been voting for myself daily.

Crystal: I definitely did a few times! When I thought about it I did but I also told my friends to go on and vote. I didn’t say vote for me or for her. I was just like go on and support. That was the main thing. It would have been a huge opportunity for any one of us so it didn’t matter if I didn’t get picked. It was an honor to just get nominated.

Slam: And way better to win I’m sure. So what kind of response do you get now when you tell people you’re an ‘all-star’?

Crystal: I really don’t tell anybody. Not that many people know I dance. It’s kind of a secret life I live like Clark Kent and Superman. The people who do know I dance were happy and excited for me. They said to take a lot of pictures.

Slam: So now that you’re an ‘all-star’ do you get hit on more by fans or players?

Crystal: Well, there is definitely a huge rule about no fraternization with the players. They don’t even come near us and we don’t go near them so I guess it would have to be the fans but it’s not necessarily hitting on it’s just that they want to say hi to you. I don’t look at it as getting hit on. They are just being friendly. We’re the part of the game that they can touch. We’re accessible, whereas they may not get close to the players.

Slam: Very diplomatic answer. What’s on the agenda when you get to Vegas? Twenty-nine dancers who have never met trying to put something together sounds kind of hectic.

Crystal: I know but we have a lot of practice time. We get there Monday, there is a meet and greet on Tuesday and it’s down to business. We’ll be in rehearsals from 8:15am to 11:30am Tuesday through Thursday so the schedule is very demanding. We’re learning four dances and the choreographer is Lori-Anne from ‘Making the Band.’ So it should be a wonderful experience.

Slam: You’ve been on the team for about 4 years now. What’s the most interesting or strange thing you’ve had to do as part of your dance team duties?

Crystal: I can tell you the most rewarding one. I can’t think of any strange things because they don’t allow us to get into too many strange or crazy things! The most rewarding one is every holiday season when the players, the dance team, Mr. Polin, and a lot of front office people go around and give out gifts to needy families. We all get in one bus and give out TVs, bikes and all different Christmas gifts. Being able to see the look on those people’s faces as they get a huge amount of love and support from celebrities is very rewarding.

Slam: In your bio I saw one of your goals is to help cure diseases. I’m assuming you don’t have any healing dance powers so what are your goals for the future.

Crystal: Well, my major is Public Health but as I finish school I would like to possibly move out to L.A. or New York and pursue dancing more intensely and see how that goes. I’ll do that for two or three years and if something happens I’ll keep up with it but if not I’ll come back home [to D.C.], become an Epidemiologist and hopefully work for CDC (Center for Disease Control) and track emerging infectious diseases.

Slam: Wow, well before we go any last words or comments for all the readers?