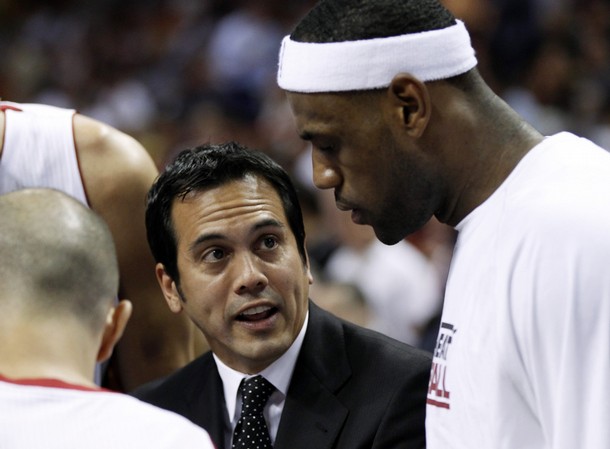 When the iPad was unveiled by Apple in January 2010, skeptical consumers viewed the tablet as more luxury than necessity. NBA teams are finding that it works the opposite way – so much so that the iPad is becoming the go-to device for game preparation and player scouting and development around the League.

While many teams still use PCs and laptops to view their statistical analysis, game reports and player evaluations, players, coaches and front office personnel are discovering the portability of iPads is speeding up the flow of team-wide communication like never before.

“We use it for everything. We put our whole playbook and rulebook on it,” said Washington Wizards assistant coach Ryan Saunders, whose father, head coach Flip Saunders, unofficially made the team the first known NBA franchise to use iPads for team operations. “Our whole calender is mapped out. Guys can know when buses are leaving, when planes are leaving.”

Of course, the Wizards, as with other NBA teams who spoke with SLAMonline about their iPad usage, have found benefits that reach well beyond notifying players of the team’s travel schedule.

NBA teams’ iPad usage
The Minnesota Timberwolves use iPads to maximize a player’s preparation for an upcoming game. “We found that with such a young group [of players], a lot of times we like to give them an expanded edit of opposing teams on their iPads,” said Adam Johansen, video coordinator for the Wolves.

Johansen explained that the team doesn’t have an optimal amount of one-on-one time with each player during the season, specifically during road trips or hectic parts of the schedule, such as when they play four games in five nights. His ability to provide edits that expose opposing players’ tendencies, strengths and weaknesses isn’t unlike what used to be available for players on their laptops. The difference is that the iPad, with its lighter frame and focus on movies, apps and Internet surfing, is a player’s best friend on the road. “A lot of times guys can wake up, or on the airplane they can open their iPad, and see what’s coming up next in terms of personnel,” Johansen said.

Wizards forward Javale McGee called the iPad “kind of handy” in its ability to display videos of plays and scouting reports of various teams. His teammate, guard John Wall, also praised its convenience. “I like it a lot. You can just use your iPad [for scouting reports] instead of bringing in a heavy computer,” he said. “You can look at highlights, get [the team] to send you film of how you played. I use it pretty often.” Wall did point out that much of the time he will use his laptop for video scouting because of its larger screen.

Not all players warm up to iPads, or any other tech device, for scouting. John Cho, the video coordinator for the Houston Rockets, said players fall into one of two categories for how they’ll learn all the information team personnel have at their disposal. “A lot of people use written diagrams, and then there are people that learn visually,” Cho said.

When asked if ex-Rocket forward Shane Battier was one of the players who embraced scouting on iPads, Cho revealed that the player well known for his scouting tendencies used an iPad during an early season shooting slump to run through all his attempted field goals. “That was the only time he watched a video,” Cho said of Battier, who was traded to the Memphis Grizzlies just before the February trade deadline.

Battier was reliant on paper scouting reports provided by the Rockets’ statistical analysis department. Cho said Battier’s aversion to video and preference for hard copy material is owed to the 32-year-old’s decade-long tenure in the NBA. Some players who are more experienced feel as though they’ve seen every kind of defensive and offensive scheme, according to Cho. Perhaps that makes it unsurprising he mentioned 23-year-old, second-year forward Terrence Williams being one player who digests as many iPad-enabled scouting reports as he can handle.

Cho acknowledged roughly a quarter of the team’s players don’t use any scouting material that’s provided by the team, whether it’s in video- or paper-form. But the ones who use video are impressed by iPads. “They think it’s amazing that you can give them all their minutes from the last 20 games and have it ready for them in less than an hour, and put it on an iPad,” Cho said.

Yet the Rockets have only two iPads – one allocated to basketball operations and the other to the development side. That means players have to share the tablet borrowed to them by Cho and his two assistants. (One full-time intern performs the primary breakdown of games while the other assistant customizes edits to show opposing players’ tendencies, how guys score points and a percentage breakdown from where each team’s points are derived.) Given that Cho estimated 80 percent of the team’s players have iPads for personal use, he said he thinks it would be beneficial for each player to have one for team use, as well. That way, they could receive personalized edits displaying all their playing time and the players they match up against.

The Wizards took that approach by giving each player an iPad to start the ‘10-11 season. The shift to technology began in the ‘09-10 campaign, when newly hired Flip Saunders provided each player with an iPod Touch on which to view playbook information and other team-related material. Ryan Saunders called that information an abbreviated version of what the team now has on iPads. They went fully paperless this season with the introduction of the tablets.

“We’re a team that’s going [toward] technology,” said the younger Saunders. “The League is moving that way.” He explained the iPads offer a more convenient alternative to players than heavier playbooks. They already use iPads for music and other activities, so the team thought providing scouting and development information on that medium was the most efficient way to reach them.

The Wizards aren’t planning to upgrade to the iPad 2, but players are held financially responsible for the device, which ranges in cost from $399-$729, per Apple’s recent $100 reduction in the original models following the iPad 2’s March release. If a player loses an iPad, a “hefty” fine is issued to him, according to Ryan Saunders.