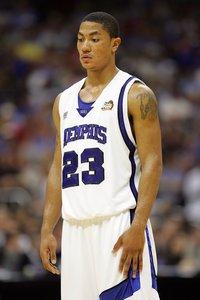 According to his college teammate Joey Dorsey, that’s exactly what’s going to happen.

”Chicago’s got a lot of pressure on them because Derrick’s from Chicago,” Dorsey said. “But they’re going to take Beasley. I’ve talked to [Rose], and [Miami is] where I think he’s going to end up. You watch what I tell you. I know.”

Naturally, both Chicago and Miami (holders of the top two picks in the draft) categorically denied Dorsey’s claim.

When the results of the Draft Lottery were announced, Rose sounded geeked about the prospect of playing in his hometown.

If Dorsey’s sources are to be trusted, his former teammate might have to get into a South Beach state of mind pretty soon. Which shouldn’t be too great a challenge.