Is Rondo About to Get Demoted? 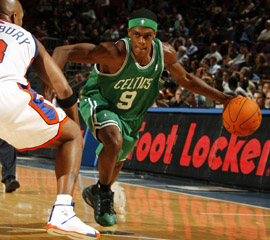 Rajon Rondo is a lot of things: fast, exciting, a gawd-awful shooter, a good passer, and the starting point guard for the 2007-2008 Boston Celtics. Actually, if you listen to his GM Danny Ainge, we might want to hold off on that last point. From the Boston Herald:

“Here’s the thing with point guard,” Ainge said. “You know how much we love Rajon, and that’s really important, but Ray Allen wants to play minutes at point guard, and Tony Allen two years ago, when he had a chance to play point guard, played fantastic. Our offense was more efficient with Tony Allen playing point guard than with any other guy during that stretch.”

“And we think Gabe Pruitt can help us there. Even though we don’t want to count on Gabe as a rookie coming in and playing a major, major role, we feel very confident with him (in that) role in case of an injury. We think he can help us there as his game evolves.”

“And then Eddie House has played the point, and we think Eddie is actually a very good fit playing alongside Ray or Tony,” Ainge continued. “So we think we have five guys more than capable of playing the point.”

That’s not exactly what one would call a vote of confidence for Rajon Rondo.

Hey, remember all the hoopla that was surrounding him when he came into the League last year, and how Celtics fans were talking themselves into believing he was the Second Coming? Nope, me neither.