Is the World Ready for Stephen Jackson’s Captaincy? 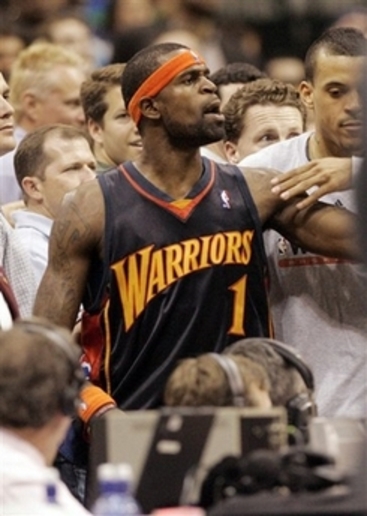 I don’t know about the rest of you, but I still can’t get over the fact that Stephen Jackson will be wearing the proverbial “C” on his jersey this season. Yes, the man who escalated and took things to a legendarily stupid level during The Brawl to End All Brawls a few years back is expected to lead the Golden State Warriors into battle in 2008.

It’s doubtful that Jack would have ever reached Capo Status on any squad but Golden State (which, let’s be honest here, is not exactly the most conventional franchise), but the fact remains that he is a now a certified leader of men. Jackson, 29, entering his eighth season in the League, says he has matured and sounds ready to assume his new role. From the Consta Costa Times:

“I think I’m growing up,” said Jackson. “I’ve still got that little Stack Jack on my shoulder, but Steve is standing up and kind of pushing him further and further off. But I’ve got to have Stack Jack sometimes, because that’s what gives me my edge on the court.”

Fear not, though, Stephen still has a healthy touch of crazy in him (emphasis mine):

Ah, that’s reassuring. I was starting to get worried that someone had kidnapped the real Whoo Jackson and replaced him with an actor.

The look on referees’ faces when the captains’ meeting takes place before Warrior games this season will be absolutely priceless.