Isiah Thomas Is Smarter Than You 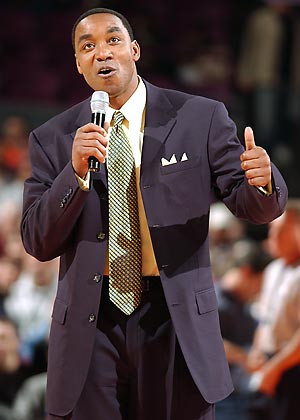 “I can’t expect them to understand the game the way I understand it or see it the way we see it.” (Isiah Thomas)

He blurted out the above quote after the Knicks’ practice yesterday. It came after yet another nightmarish loss at home two nights ago, a 113-102 spanking at the hands of the Washington Wizards. The Garden fans had started with their “Fire Isiah” chants as it became evident that the Knicks were again about the suffer an all too familiar fate. Thomas then decided it was time to separate the ignorant from the knowledgeable.

Now, this might seem like a dangerous move on Isiah’s part; alienating the vocal and passionate Garden faithful might be seen by some as career suicide. But I don’t see it that way. Not at all. Isiah is simply smarter than everyone, and it’s about time people started realizing and accepting this fact.

Do you think it would take anything less than sheer genius to survive three years under the New York glare with these credentials: no playoff wins; a humiliating playoff sweep at the hands of the Nets; a winning record of under .400 (look it up); comically bad (unprecedented, really) management of financial assets; the hiring and firing of Larry Brown; getting sued by a former colleague for sexual harassment; and the unmatched ability to turn a once-proud franchise into the easiest joke in the land?