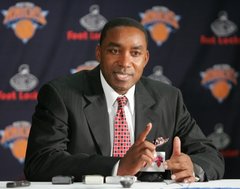 Attention, Knicks fans: it is not safe for you to read any further. I strongly urge you to turn away before it’s too late. Don’t say you weren’t warned.

Isiah Thomas tells ESPN that not only does he plan on running the franchise again soon — into the ground? Zing! — he also thinks he can reel in LeBron James in a few years, and help the franchise win an NBA championship.

He may not be allowed by the League to work for them at the moment, but as soon as he can get out of his contract at Florida International University, Thomas envisions himself riding a float down Broadway as a vindicated champion.

He really said this, because, um, he’s a “visionary”:

Isiah believes he can recruit James out of Miami and into Madison Square Garden in 2014. Isiah believes that, with or without James, he will someday help the Knicks win their first NBA title since 1973. “I want to be on the float and I want to get my ring,” Thomas said.

Asked if he hopes to replace Donnie Walsh whenever the 69-year-old Knicks president retires, Thomas said, “Every single day of the week. When I look at my GM/executive record, if I’m evaluated on that, then whoever’s after Donnie, if you’re not talking about some of the top people in the game, I’ll put my draft evaluation record up against anyone’s.”

… Not that Thomas is giving up on the hope of being a high-ranking Knicks executive in the summer of 2014, when James can opt out of his deal with the Heat. “I’d like to still hold onto that dream,” Thomas said. “I do think that he’ll win championships here in Miami, and they will be a great dynasty. … But I think when he comes to New York and he wins it in New York, I think he’s the greatest player ever.”

Knowing that Walsh’s days are numbered in the Big Apple, and James Dolan’s well-publicized infatuation with Zeke, it’s amazing that Knicks fans continue to be as impassioned about their team as they are.

Speaking of fan disillusionment, FIU supporters will surely be thrilled to read all about Isiah’s hopes and dreams for the very near future.