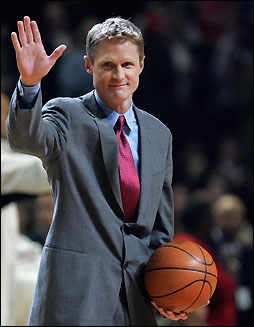 I’ve been crazy all day shipping SLAM 107, which in our crazy publishing schedule means that, by now, you all should have seen 106, and hopefully enjoyed it. Now that I spend more of my time holed up in the SLAMDome working than traveling for stories, I don’t have too many “extras” to add to what I worked on (running down Khalid’s play list or Susan’s lunches just can’t be that appealing).

My biggest writing responsibilities for the remix issue were the Monta Ellis feature and Chalk Talk on Kobe and the Lakers. The Monta Ellis scenery is covered in the story; we hooked up at the Ritz in Manhattan and did the interview in the bar there. Not too much to add to that, though I will say that seeing hulking Warriors’ coach Don Nelson walk into the Ritz chewing on an unlit cigar was pretty funny. I hope it comes through in the story, but Monta is basically a soft-spoken dude whose smallish stature and shy nature should not be confused with a lack of confidence. He doesn’t care how “unlikely” his story is, he feels like he will be a star in the NBA.

While I felt like I had the right amount of words for the Ellis story, Chalk Talk is a whole different animal. Devised against Ryan’s wishes, we created it as a way to get some real scout/coach/analyst talk into the magazine. Since we’re big fans of TNT’s NBA Coverage and because the TNT PR staff is always so on point, we decided to start by talking to TNT analysts. I can’t see us ever giving this section much more space in the magazine than the 1/3 page it got in LeBron (page 50 for those of you who have the issue but skipped over it; if you don’t have the issue, please go buy it immediately), but that’s only because we’re too photo and personality driven. It’s certainly not because these analysts don’t have a lot to say.

In fact, what I enjoyed most about interviewing Steve Kerr for this piece is being reminded just what an expert someone like he is. It’s like, when he’s on the air doing an average Thursday game, Steve can show his knowledge, but it’s always going to be “edited” to some degree. Between the play-by-play guy doing his thing, sponsors to thank, the speed of the game and the simple fact that TNT still needs to cater to more than just serious basketball nerds, it’s rare that Steve ever gets to talk that long. So, when I got with Steve over the phone I kind of expected a similar style of speech—sound-bite answers, more or less.

Instead, when I threw out little more than the topic of “Kobe, the Lakers and how they’ve done this season,” Steve flowed like water. I followed up with some specific questions about the Triangle which morphed into what I put in the magazine, but I thought you guys—Kobe lovers and haters alike—might appreciate reading a bit more of what Steve had to say. Here goes…

“I expected the Lakers to be good this year, but not this good. They’ve been one of the top five or six teams in the League. I think they started to evolve in that playoff series against Phoenix, when more people were getting involved on offense. It was no longer just the Kobe Bryant Show.

The guys have gotten more comfortable with the Triangle and now they can do great on offense even when Kobe’s on the bench. And Kobe’s improved, too. It can’t be a physical improvement—after all, for the last five or six years I don’t think there was a single skill you could say he needed to work on, from footwork to defense. So if he’s improving and you know it’s not physical, it’s more things like knowing when to take over and when to step back.

I think that the Phoenix series was a big step, and then his knee injury might’ve been a blessing too. It limited Kobe’s athleticism and maybe forced him to tone things down and do an even better job of getting everyone into a groove. And that’s what he’s been doing all season.”

For the next issue I talked to Kenny Smith on the phone about Gilbert and the Wizards. Once again, I loved hearing Kenny go on at lengths he rarely gets to on TV, but I wasn’t able to catch as much extra stuff because Charles Barkley was in the background making jokes the whole time. So all you’ll get from that convo will be in the actual issue…which is coming in about three weeks. Stay tuned.