Italian Team Claims to Have ‘Economic’ Agreement With Kobe Bryant 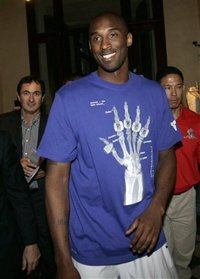 When Kobe Bryant recently said that playing in Italy would be a “dream” for him, that’s what everyone considered the courtship between the Laker superstar and the Virtus Bologna club —  a dream.

According to Virtus’ management team, however, things are very serious between the two, and a deal for Bryant to play in Italy starting next month is just about done. The Italians claim that they have reached a verbal (“economic”) agreement with Kobe, which includes an opt-out clause once the NBA lockout ends.

“We have reached an economic deal,” Virtus president Claudio Sabatini told a local radio station. “There’s still some things to arrange but at this point I’m very optimistic. I would say it’s 95 percent done.” A person with knowledge of the negotiations told The Associated Press on Friday that the sides have settled on a $3 million contract for the opening 40 days of the Italian league season. The person spoke on condition of anonymity because the deal has still not been signed.

Bryant is expected to get a work visa and return to Italy next week. “Kobe should be in Bologna by Wednesday or Thursday with his visa in hand for medical visits and then we can deposit the contract with the league,” Sabatini said. “I want to make clear that right now there are still no signatures. We’ve got to write the contract, which will then be read over and over again.”

Amazingly, even though there’s plenty of doubt about Kobe actually signing on with Virtus Bologna, Bryant already has serious haters in Italian hoops.

Check out these quotes from an American baller who plays for a rival team: “Former USC guard Daniel Hackett, a dual citizen who plays for Pesaro in Italy, said he would give Bryant a hostile reception if he faced the former NBA MVP. ‘The only way to stop a player that good is with a hard foul and he knows that,’ Hackett said. ‘I’ve got five fouls to commit and they’re going to be the hardest five fouls I’ve ever committed.’ Hackett also criticized speculation that Bologna will ask opposing clubs hosting Bryant’s away games to chip in a portion of ticket sales to help pay Bryant’s salary. ‘I really hope Kobe doesn’t lower himself to this level for economic and commercial motives,’ Hackett said, according to the Gazzetta. ‘To me, it would be a big disappointment to see him here under these circumstances, and a loss of respect for a player who is too big to dirty his hands in this league.'”

Kobe Bryant’s Italian adventure — should it happen — is going to be simply awesome.