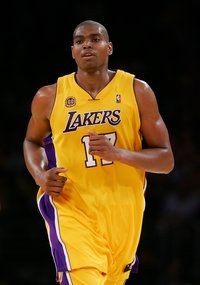 The Zen Master is on a roll of late. First, he ignites a mini-firestorm before a single basketball has been dribbled by saying Lamar Odom might lose his starting spot. The Lakers’ coach is now acting as if Andrew Bynum – who, by the way, looks as though he had weights for breakfast all summer long – isn’t worth wasting his breath on.

Bynum told the press that he wants to make the All-Star team this season, but according to his coach, Young Andrew should concern himself with getting in shape first.

However, Bynum’s performance the first two days of camp wouldn’t bolster his all-star case, according to Coach Phil Jackson, who claimed to be so repulsed that he wouldn’t answer questions about the 20-year-old.

When pressed, Jackson said, “I thought Andrew was tired today, so I’m not going to say anything about him.”

Unlike Odom, Bynum immediately saw through Phil’s motivational tactics and took them for what they were. His admission that Jackson’s practices are “boring”, however, probably isn’t the wisest thing to say at the start of training camp.