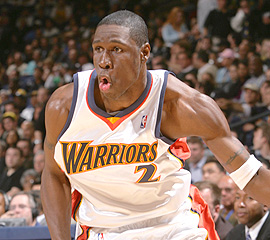 “If the allegations prove true, this could be one of the most damaging scandals in the history of American sports,” the Illinois Democrat wrote in a letter sent to Stern on Wednesday.

(Rush might also call for a hearing on the issue “should the facts warrant public scrutiny.” To be honest, I’m surprised it took this long for a politician to get involved.)

-Here are some of the laws that the Feds could use against Don-a-gie.

-Kurt Thomas says he has no hard feelings for the Phoenix Suns organization after they traded him.

-Mickael Pietrus’s people aren’t convinced that their guy is necessarily returning to the Warriors.

I heard from a member of the Mickael Pietrus camp a few hours ago, and he calmly but firmly thwacked at my conclusion that his client inevitably will have to accept the facts and sign the Warriors’ $3.47M qualifying offer.

-Andre Iguodala will be one of the guys scrimmaging against Team USA next month as it preps for the FIBA Americas Championship.