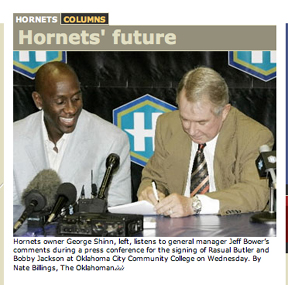 For the first time in about two weeks, my plate is cleared and I have nothing else to do except, or course, about 200 things for the website. Yes, we’re still tweaking the site and making adjustments, and there are still changes in the works.

THE LINKS…
• I’ll occasionally link to stories by John Canzano up in Portland, who consistently has news or rumors or something worth reading. Even though it has little to do with basketball, this story is one of the best things he’s done in a long time — moving, real stuff. Go read the story now. Go ahead, click on it and read it.

Back? Good, because there’s a nice postscript: the response from the people of Portland.

• The latest person endorsing vitaminwater is Allen Iverson, as seen on billboards along I-95 and on the back of the poster in SLAM 101, where he’s pictured with a bottle of Dragonfruit-flavored water. And I’m not being paid to do this, but I’ll also give my full endorsement to vitaminwater, which I drink like, er, water. Come on, vitaminwater, let’s crank out some Links-flavored juice!

• Hornets owner George Shinn says he doesn’t mind giving out big contracts to franchise players. But if we believe this picture and caption in today’s Oklahoman…

• Ripping the ABA in the LA Times…can’t wait until Alex Wolff fires back in his SI.com ABA articles — beef!

• The court case in Toronto involving Jason Caffey, Sam Cassell and Gary Payton continues to drag on — remember, this all started back in 2003 when they were all playing for the Bucks. Anyway, Sam-I-Am took the stand yesterday and testified that GP called the stripped either “my ho” or “my whore,” depending which paper you prefer, Sam also allegedly called the stripper’s boyfriend — a male stripper who is white — the n-word. I’m thinking everyone involved in this wishes it was over.

• Keith Van Horn, come on down! The Denver Nuggets want to give you some free money. The funniest part about this is that Van Horn’s agent can’t get him to commit to anything because he’s on “a lengthy fishing trip in Alaska.”

• The Raptors have signed Uros Slokar, who — surprise! — used to play for Benneton Treviso in Italy. From now on we’re calling them the Treviso Raptors.

• The Cavs are trying to lowball Drew Gooden, and his people don’t seem to be having it.

• When you’re described as “elaborately tattooed” before anything else, that’s probably not a good thing.

• The Suns have signed Sean Marks, who will perform The Haka at midcourt before every game.

• Will Devin Brown be the best player the Warriors add this summer?

• The Nets have replaced the injured Josh Boone by trading with Seattle for veteran snake-handler Mikki Moore. Any coincidence that the Sonics saw their season-ticket sales go up?