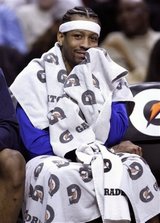 The Allen Iverson Saga really could be making its way to Turkey, after all. According to A.I.’s manager, Gary Moore, Iverson is very serious about signing on to play with the Turkish squad Besiktas Cola Turka.

Iverson isn’t expected to make a decision until week’s end, and Moore says that negotiations with a team in China aren’t dead either. For the time being, however, the $2 million (plus potential bonuses) offer is making Turkey sound mighty intriguing to the Iverson camp.

Yahoo! and the AP report:

Gary Moore, Iverson’s personal manager, said Monday night there are “serious talks” for Iverson to play with a Turkish team. Iverson, the 2001 NBA MVP, is negotiating with Besiktas Cola Turka for at least a one-year deal. “This team seems very interested in having him come play,” Moore said by phone. “Allen absolutely wants to play basketball. He has no hesitation going there if that’s the best opportunity for him.”

“We are in very serious negotiations with [Besiktas],” Gary Moore said. “Istanbul is beautiful from everything we’ve learned. It’s not that far from the U.S., and the competition is good which makes it all attractive. Allen wants to play basketball.”

Neither Allen Iverson or his agent Leon Rose have commented on negotiations with the Turkish team.

The Answer in Istanbul. Sounds like a highly-watchable reality television show, no?