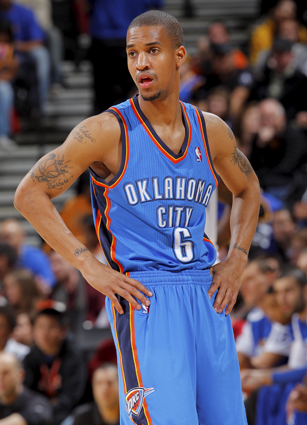 “Me and you never hung out when we were in high school, but it’s all love. You feel me?”

Cole says you can consider the warm feelings mutual.

A lifelong hoophead, Cole respects Maynor’s gritty game, repertoire of floaters and even recalls getting chills watching Maynor play this past winter.

Over the course of a lengthy conference call that took place during the press run leading up to Cole’s debut album, Cole World: The Sideline Story, the two up-and-comers from Fayetville, NC, took the opportunity to express their admiration for one another. They also reminisced about their high school days and talked a whole lot of hoops and hip-hop.

Read a large section of the convo, which truly is too deep for the intro, below.

SLAM: So I understand that you guys went to rival high schools in North Carolina?

Cole: You were two years under me. My first year on varsity [at Sanford High] was my junior, which was, like, ’01-02 and you was at Hoke County.

Maynor: Yeah, I was at Hoke County back then. Did you play?

SLAM: What level of ball was this? Was this high level ball y’all were playing?

Maynor: It was AAAA in NC.

Maynor: Yeah, yeah, yeah. It was good run out there…all that.

Cole: You know what it is to me? As I got older, all I knew was what I knew. Of course Eric went so much further than from whatever I could do, so he got to see the other talent. I never did play AAU.

Maynor: That’s where it was. When I was 15, I was playing with the Charlotte Hoyas and I was getting out there and seeing all the college guys and they recruiting you. And then when I was 17, I started playing with the Fayetteville Warriors. Thing about it was, we didn’t have any money—

Cole: —So you couldn’t go places and travel.

Maynor: We had the talent down there, but we didn’t have the money. You feel me?

Maynor: When did you really start rapping?

Cole: 12 years old. Middle School. I took it serious around, like, eighth grade.

Maynor: Yeah? When did you realize that you could do this for real?

Cole: Even though it wasn’t true with basketball, I approached it with the same mentality. I used to tell myself that I could do this with basketball. Even though I didn’t really have the skills, I thought I could. I wouldn’t go around talking about it, but in my head I believed it. I was like, Man, you know what, I’m better than these dudes—even though it wasn’t true physically. Rap was the same thing; it just so happened that it was actually true.

I used to go to football games on Friday night, and every time there would be a cipher. I don’t know if you remember, but at the football games you’d always see like 20 dudes huddled up just rapping, and I was in there. That’s when I started to notice, like, I wasn’t just doing this at my house with my friends; I was actually going out in public.

It’s like, when you’re balling outside your house you think you’re the shit but you don’t really know until you go to that court and play against other dudes. That’s how it was in the ciphers. I would go and I would notice that every time I would rap, everyone paid attention to my verse and I would come to one line and I would shut down the cipher! Dudes would separate. Dudes would run from the cipher, like, ‘Oh shit! He crushed it!’ Same way if someone did an AND 1 move and shut the whole court down. That’s when I realized, and that was probably like ninth grade.

Maynor: Let me ask you a question: You can really talk about your rapping game in basketball terms, couldn’t you, like you was just doing?

Cole: Exactly. That’s what I do. I always do that—

Maynor: —Say for instance you rapping, you get done and you’re talking to a basketball player and you’ll be like, ‘man, I just did that like you would do this on the court.’ You feel me?

Cole: Exactly. Because basketball was my first love and my first dream. So even though I didn’t go that route, because I didn’t have the talent…Actually, you know what’s crazy? This middle school I went to didn’t have no team, so the first time I attempted to play ball was my freshman year. I had a little bit of game but I didn’t have the fundamentals. I didn’t know about screens and running plays. So by the time I made the team my junior year, I was so far behind the curve that my confidence wasn’t there.

After my senior year—and I started my senior year, I wasn’t a main contributor, I was just a role player—the day after the season was over coach had an open gym. When I tell you I came to the open gym and was busting ass, I’m not lying. Once I wasn’t a role player as soon as that pressure was off and I could just go in, I realized, Yeah, I have some talent. But, it was too late. I hadn’t had confidence. Luckily with rap I had that confidence early. Which was a blessing.

Maynor: That’s crazy. Me and you never hung out when we were in high school, but it’s all love, though, you feel me?

Maynor: And people know that. Like, you were in Toronto at a game and I thought, Yeah, that’s what’s up.

Maynor: It’s crazy because Jay-Z is my favorite rapper of all-time, never dropped an album that I didn’t get. And for him to sign you, I’m just like, Cole got it.

Cole: I appreciate that.

SLAM: Eric, when did you know you could had what it took to make the NBA?

Maynor: Playing in the NBA was always a dream growing up. But I think it was like my senior year in high school and Coach [Jeff] Capel’s dad, who was an assistant coach in the NBA, came down to the gym and worked us out. And I’m about to be a senior, and he says, and I’ll never forget this day, ‘Y’all need to be workin’ on your game; none of y’all is going to be playing in the NBA.’ Everybody took that with them, like, ‘I’m not going to make it.’ But I swear, that night I told my man, ‘He’s got me twisted. I’m going to be in the League one day, I swear.’

Cole: It’s crazy that that stuck with you and fueled you. I know that was your dream but, was you already going hard or is that what kicked you into next gear?

Maynor: I was going hard, but, yeah, that did kick me into the next gear. You always have doubters out here, no matter what. You can come out with the best album ever, and you’ll still have people out here talking about this and that. I can go out and do this and that on the court and people will still be hating! But that joint just made me want to work hard, after school and stuff I’m staying in the gym, just working out. It always stuck in my mind. That never left my mind, and every time I see him, I really think about it. When he was an assistant coach with the Bobcats I would tell him, ‘Yeah, yeah, you did tell me I wasn’t going to be here.’

SLAM: Cole, you ever have an experience like that, where somebody told you that you weren’t going to do it and that sparked you?

Cole: I never had nobody tell me I’m not going to do it. But I was just having a similar conversation two weeks ago about a similar topic, and I realized that what helped me with my motivation with rap actually came from my basketball story. I got cut my freshman and sophomore years of high school. It seems small scale in the grand scheme of things, but when I got cut my freshman year it was heartbreaking. I know some of my homeboys attitudes were, ‘I’m not going back out.’ But I didn’t understand, ’cause I’m like, if you love the game like I love the game how are you not gonna go back out?

If somebody didn’t quit after getting cut freshman year, they’ definitely would sophomore year. But to me, the way I work, I was just like, ‘now I know.’ Just being the manager’s not going to do it. You have to work on your game. That’s when I started getting in the gym every day. The next year I made the team and ended up starting my senior year, but that rejection, that getting cut, is what motivated me and stuck with me through rap.

SLAM: Cole talked about the pride he feels when he sees you ball. Do you feel the same way when you see him on stage or hear his music?

Maynor: When I see him on stage or listen to his music I just think how crazy it is, man. He done made it from nothin’, you feel me? He basically put everything to the side and said, ‘man, I’m going to make this.’ Every time I listen to his music, or it comes on the radio or we hear it on the iPad, I say, ‘you know where he’s from!’

Maynor: Stephen Jackson have you on his iPod and he knows every song.

Maynor: He had every song and then he said, ‘yeah, that’s Baby Hov righ there.’ Straight up my man, straight up.

SLAM: Cole, you got Jay-Z sort of over your shoulder. Eric, you ever feel that you’re in the shadow of Kevin Durant and Russ Westbrook and them?

Maynor: It’s like this here: Everybody is like, ‘You should be playing more.’ I talked to the GM of the team and he basically told me ‘you a big part of the team here; we’re not trying to break up the team cause in the next couple years we can win a couple of rings.’

I’m not the type, trying to step on toes. But we know our roles on the team. Of course I wanna be a starting point guard in the League, and I think that will happen for me, but I’m at a point right now where I’m trying win, trying to get a ring. KD is definitely one of the best players in the League, but there’re days when KD comes to me and asks me for advice…so I don’t feel overshadowed at all.

Cole: I knew what I was getting to begin with. I feel like every man determines his own destiny. Period. Point blank. If anything Jay’s just set an example for me, over the last 15 years. To be the hottest, biggest rap in the game consistently every year, he showed me it’s possible. It’s hard. You gotta be willing to work that long. No breaks no days off. But he showed me its possible. Overshadowed? No, I’m trying to make my own path.

I’m a competitor. I still look at them like oh that’s Jay, that’s Kanye, but I’ve reached the point now where I look at them as peers. Same thing for Eric, with KD probably, when you’re in a game against Kobe it reaches a point where you stop saying ‘Oh, that’s Kobe.’ You’re like, ‘Oh, he’s plays for the Lakers; I gotta whoop his ass.’

Maynor: I was a LeBron fan in college. As soon I got to the League it was like no more fan stuff. It’s like I’m going at you just like you’re going at me.