Jackson on Bynum: ‘He’s a kid, he doesn’t know any better’ 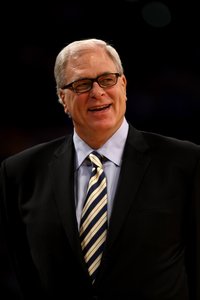 For the second straight night, Andrew Bynum suggested that Phil Jackson didn’t use him properly. After hearing criticism from his coach about a lack of rebounding (Young Andrew only managed three boards) in the victory against the bumbling Sixers, Bynum explained his shortcomings on the boards to the media.

“I might have gotten some in the last six minutes,” Bynum said, referring to being on the bench in the latter stages of the fourth quarter for the second straight night. “You never know until the fat lady sings, and she sings for me a lot.”

As for Phil, he doesn’t think Bynum has any right to question his decisions regarding playing time and rotations.

“That’s none of his business. He just goes out and plays. That’s his job,” Jackson said matter-of-factly. When pressed further, he smiled wryly and added, “He’s a kid. He doesn’t know any better.”

I don’t think any real problems are going to arise between Phil and Andrew as the season drags on (Phil’s too shrewd to let that happen), but it’ll be fun to watch just how much longer they’ll continue to lob quips at one another through the Fourth Estate.