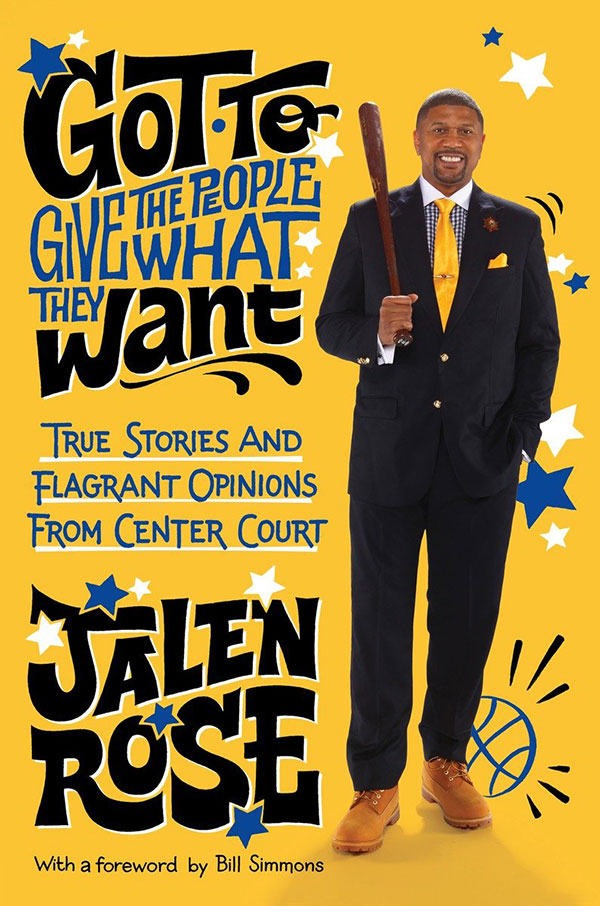 “One minute we’re playing Madden, and the next minute a team of undercover cops is banging on the door, barging into the living room, whipping out the badges and guns, securing the premises. It was pretty much what you see on TV. They came in vans, disguised as dry cleaners. While the scene unfolded, I was defiant, laughing at the cops, talking to them, asking them incredulously what they thought they were going to find.”—Jalen Rose, Got to Give the People What They Want

In 1993, soon to be Michigan junior Jalen Rose found himself caught between the crossfires of undercover police and a civilian carrying three rocks of crack. Given his stature and future prospects of going pro at this crucial time, I asked him what was so funny.

“I was laughing unfortunately, because growing up in a concrete jungle,” Rose tells SLAM, “I was fearful of what could take place. You become so desensitized to violence and street life from a normal 17-, 18-year-old fear that I didn’t have. That’s unfortunate because you lose your innocence early.”

Rose’s candid and forthright ways that his fans have come to love about his personality have all been wrapped in this book, providing true accounts into the life of the Michigan star.

It’s been an open secret as to how Rose feels about the setup of the NCAA. Throughout his book and through our interview, Rose openly criticizes how the NCAA works.

“You realize everybody on the college campus can work or make money except student athletes.” Rose continues. “If you work for the school newspaper, they pay you. If you’re in student council and student government, they give you a parking spot, game tickets, thousands of dollars, all of that. They’re controlling my likeness and they’re controlling my freedom as a student athlete.”

Rose discusses how the universities are pocketing all this revenue through means of apparel, brands and likeness, while rewarding student athletes nothing, essentially controlling them as non-paid full time employees. In his book, he proposes several suggestions in how the NCAA can fix this mess.

“To me, the measure of a man is how he treats people who can’t do anything for him.”

This quote in his book really stuck with me, as we dived into the topic of his ongoing feud with childhood friend and possible future Hall of Famer Chris Webber. Detailed in the book, Chris Webber basically tells Jalen Rose to get lost at the 2013 NBA Finals. Since they practically grew up as childhood friends, I pressed Rose about the possibility of a reconciliation between the two.

“I think so yes, and I hope so even more. I think as we continue to grow and nurture, the relationship will be repaired. That’s my brother. I love him.” Rose goes on: “As you get older, there’s no rule that says you have to be friends with the people in high school or college. We all have that right. What makes our situation unique is we aren’t just former teammates or classmates or alums. We’re actually brothers, and normally you don’t fall out with family.”

Throughout Jalen Rose’s book, it is easy to see that Rose is all about philanthropy and never neglecting where he came from, for better or worse. Instead of growing up hating what he didn’t have, Rose appreciated what he did have and worked hard to get to where he is, so he could give back to his hometown.

Jalen Rose Leadership Academy (JRLA) was founded by Jalen himself and he has goals of building a system where 85 percent of the students graduate from his high school. Additionally, he plans to track future high school alumnus in college to make sure they graduate too.

“We’re tracking kids through college too,” Rose tells SLAM. “We have a college success staff also. We’re taking these kids and putting them in position to be successful in life. That’s why leadership is in the title. Life skills, social skills, etiquette, problem solving, decision making, leadership. While many have been really successful at graduating from high school, they don’t track how they do in college. We’re owning that data.”

His book is filled with stories that not many former professional athletes seem to want to share with the public, including an assassination attempt, stealing Patrick Ewing’s TV, as well as the reason he has a small bump on his forehead.

Jalen Rose’s book comes out October 7, and you can also catch Jalen Rose on ‘Jalen & Jacoby’ on ESPNRadio on the weekdays, as well as ESPN and ABC.

Oh, and what hurt more to Rose: losing to Kobe Bryant in the 2000 NBA Finals or letting Kobe drop 81 on him and Toronto?