Jamal Crawford scores 21 points in the fourth to lead the Clippers to a fifth straight win on Monday night. 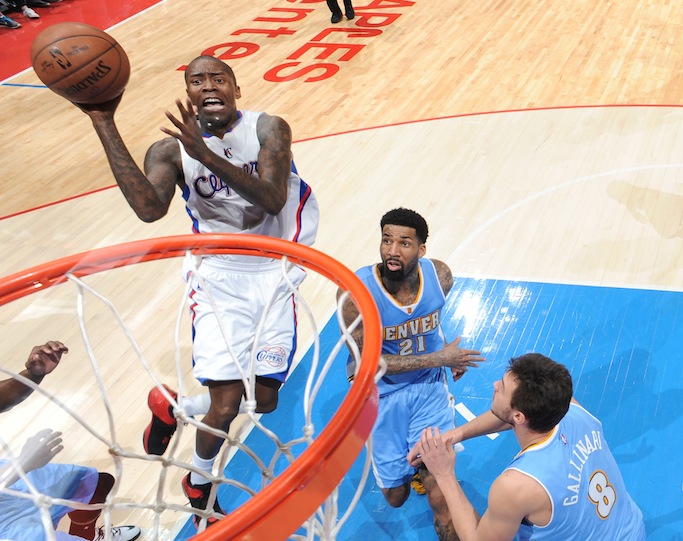 It was Memphis’ powerful frontcourt that led the Grizzlies to a solid home win against the visiting Orlando Magic last night. Both Zach Randolph (24 points and 10 rebounds) and Marc Gasol (16 points and 10 rebounds) were in double-figures to get their team the victory. Memphis built a lead right in the first quarter. In the second, they outscored Orlando 33-19 to take an 18-point halftime lead. Gasol had a little fun with the basketball in the second:

The Magic tried to shift the momentum in the second half. Nikola Vucevic (18 points and 12 boards) and his Magic managed to pick away at the Grizzlies’ lead a little, but it was an effort unrewarded.

Last week, the announcement can that fans around the world voted Anthony Davis to be a starter for the West in this year’s All-Star Game. Davis proved his worth all season long, and last night was no different. The New Orleans Pelicans hosted the Philadelphia 76ers yesterday, and Davis did not make them feel welcome at all. He finished with 32 points, 10 boards, 3 assists, 3 steals, 4 blocks, and 0 turnovers. Phew, that’s quite a well-rounded stat line!

Ryan Anderson added 19 points off the bench and Tyreke Evans dished out 12 assists (his second consecutive game to do so) as the Pels built a comfortable 25-point lead. They took care of the Sixers in rebounding and field goal percentage, and never let ‘em come close in that second half. Now the Pelicans are winners of four straight, while the Sixers are losers of six in a row.

Not having Kevin Durant dressed last night for the game against the Minnesota Timberwolves was not a problem for the Oklahoma City Thunder. Russell Westbrook scored a team-high 18 points to go with 5 assists, Serge Ibaka had 13 points and a season-high 19 boards, and three other Thunder players scored in double-figures to contribute to the victory. After taking a 6-point lead at the end of the first quarter, the Thunder built a 15-point advantage in the second—the largest of the game. But by halftime, Andrew Wiggins (23 points) and the T-Wolves cut the lead to 8. Thaddeus Young finished with 22, and Gorgui Dieng brought down a season-high 18 boards.

Shots didn’t fall too easy for either team. The Thunder shot 41.9 percent from the field, and the Wolves 34.1 percent (a season-low). The poor shooting courtesy of the Thunder defense, who also swept 9 steals in the game, mixed with domination in fast breaks (32-14) handed Minnesota its fifth straight loss.

After an even 17-17 first quarter, the Boston Celtics exploded in the second quarter for 38 points. They held the home team Utah Jazz to just 14 in the quarter, and went into the locker room at halftime with a 24-point lead. In the third quarter, the Jazz turned the tables. They scored 35 compared to the Celtics’ 16 to cut the deficit to 5 heading into the fourth. Gordon Hayward led the charge for the Jazz with 26 points, and Enes Kanter added 20. But the efforts weren’t enough to keep Tayshaun Prince (19 points) and the Celtics from stealing a win in Salt Lake City.

Looking good, Jamal Crawford! After scoring 0 points in the first half, and just 2 in the third quarter, the reigning Sixth Man of the Year put up a whopping 21 points in the fourth quarter.

A showing like that to help seal a fifth straight win for the Clippers deserves a serenading by teammate DeAndre Jordan, obviously.

Also contributing to the Clips’ win over the Nuggets last night was Chris Paul (15 points and 9 assists), Matt Barnes (18 points) and Blake Griffin (14 points and 10 boards) among others in single-digits.

Both Ty Lawson (19 points and 11 assists) and Wilson Chandler (18 points and 10 rebounds) finished with double-doubles for the Nuggets. But Los Angeles was too swift, overcoming a 16-point deficit on their home floor to hand the Nuggets their seventh straight loss.