James Harden Has a Concussion from Metta World Peace’s Elbow 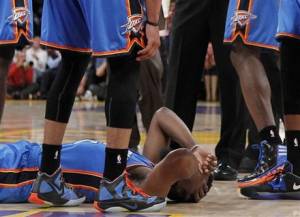 Metta World Peace’s elbow to the head of James Harden yesterday afternoon, resulted in a concussion for the OKC Thunder’s star forward.

At the moment, there’s no telling when Harden will return to the court. The leading candidate for the NBA’s Sixth Man Award this season must first pass a battery of tests, under the League’s newly-instituted concussion policy.

Once he’s considered free of concussion symptoms, Harden must make it through increasing stages of exertion — from riding a stationary bike, to jogging, to agility work, to individual basketball skills — while ensuring the symptoms don’t return after each stage. If Harden passes each test the team then has to consult with Dr. Jeffrey Kutcher, the director of the NBA’s concussion program, to determine when Harden can return.

A team spokesman said Harden passed league-mandated testing at halftime, and Harden originally was set to return to the game. But the team’s medical staff prevented Harden from returning because of concern with his condition, the spokesman said. Harden later was diagnosed with a concussion. He was not made available to the media following the game and was unresponsive to multiple attempts to gauge his health when seen outside of the locker room. Harden did fly back to Oklahoma City with the team. But concussions can be puzzling, making the timeline for Harden’s return a mystery to all.

Players and coaches on both the Lakers and Thunder (and others watching it on TV) were critical of the vicious elbow, and Metta World Peace did issue an apology to James Harden, calling the incident “unintentional.”