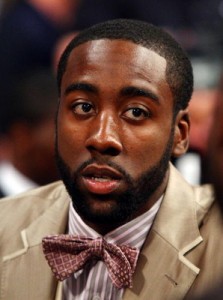 Chris Bosh was the biggest mover this week, increasing his NERD rating 6.5 points to 13.7. Bosh has been very efficient, stepping up in place of the injured Dwyane Wade. In his last four games, Bosh is averaging 28.8 points, 6.5 boards, and 3.0 assists. Both Bosh and his partner in crime, LeBron James, have true shooting percentages above 60%. No wonder Miami has the second-most efficient offense in the League, behind only the Denver Nuggets.

Andre Iguodala fell several spots, as his NERD rating decreased by 4.5 points. While the Sixers are still a solid team in the East, they are slowly coming back to Earth from their meteoric start. Iggy is averaging just 8.5 points per game over his last four games and has only made one of eight three-pointers during that span. The Sixers have maintained their stout defense, allowing only 95.6 points per 100 possessions, the best in the league, but their offense is slipping. Iguodala is currently tied for the worst offensive season in his career, scoring only 1.07 points per possession.

Knicks guard Toney Douglas currently ranks dead last in NERDiness, at -13.6. Douglas is shooting 32.8% from the field and 23.7% from three-point land, only making 18 of 76 attempts. Add his two turnovers per game, and that grades out to the worst offensive efficiency in the League (among those with at least 300 minutes) at 0.79 points per possession. It doesn’t stop there, though—Douglas is also using a quarter of the Knicks possessions while he is on the court, meaning he (or New York) believes he should be one of the primary offensive forces while he’s out there.