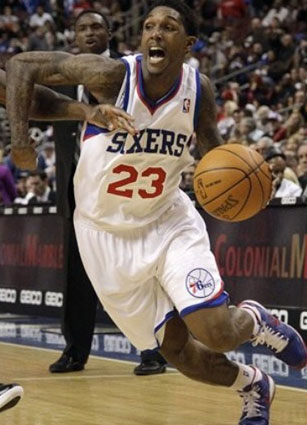 The New York Knicks continue their downward spiral, having lost three straight. As a result, their probability of making the playoffs has dropped another 24.6%, giving them about a one-in-five chance of seeing post-season action. The main reason for their decline is a lack of offensive efficiency. Amar’e Stoudemire is shooting a career-low 42.8%—his career average is 53.3%. His 0.96 points per possession is by far the lowest in his career as well. The only time he was close to that figure was in his rookie and sophomore years. Also, Toney Douglas is shooting an abysmal 32.3% while still using over a quarter of the Knicks’ possessions.

With three straight wins over big-time opponents (Oklahoma City, Denver, and Memphis) the Clippers have increased their chances of making the playoffs by 10% since last week. Despite popular opinion, the Clippers actually do a solid job taking care of the ball. They are tied for No. 4 in the League in turnover rate at 13.3% (League average is 14.3%). The Clippers are also tied for fourth in the league in effective field goal percentage, which includes the value of three-pointers, at 50.8%. It’s on the defensive side of the ball where Clippers struggle a bit—they foul opponents more than any other team except for the Warriors and Raptors—two teams with which you do not want to be grouped.

The Orlando Magic are in the midst of an embarrassing skid, and own the largest decrease in NERD since last week, dropping by 8. Since last Monday, the Magic are 1-5, suffering losses to bad teams (like the Hornets) and enormous comeback losses (like against Celtics). What’s more, Dwight Howard and company have scored under 70 points in three of those games, including a disgusting 56-point performance against Boston. For a team that was just recently the third-best offense in the League, the Magic now rank No. 19, scoring just 101.7 points per 100 possessions. The only bright spot is that thanks to Dwight Howard, they are still the best rebounding team in the league, securing 77.8% of available defensive rebounds.